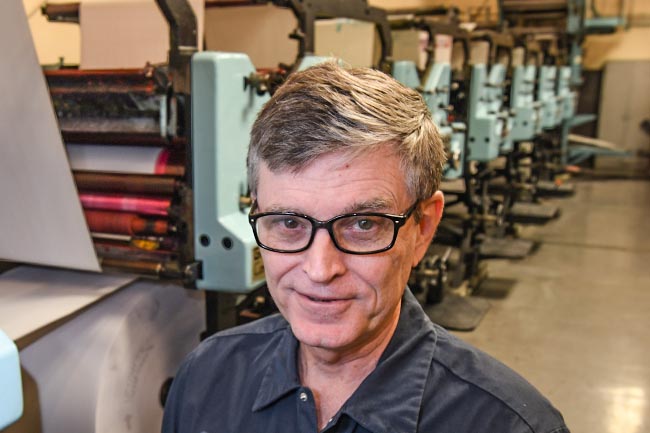 Eddie Lance is retiring after operating the press at the Oxford EAGLE for more than 23 years.

Once the copies of the EAGLE are delivered this afternoon, Eddie Lance, the head press operator for the newspaper, will have finished his last day at work after 23 years.

A lot has happened in the more than two decades that Lance has been with the paper, from national tragedies to local deaths to technological shifts in printing.

Lance began his 40-plus years in the printing industry as a commercial printer before making the jump over to the news industry.

On his last day at the office, Lance said he was having “mixed feelings.”

Over the years, Lance has had his memorable news days, but he says that Sept. 11, 2001 sticks out prominently.

Lance says that in his time at the paper, he’s only missed one day of printing and that was because of a tornado that cut the power to the presses.

“He was tirelessly committed to getting the newspaper out on time every day,” said EAGLE Publisher, David Magee. “Most weeks, he worked six days a week no matter how hard we tried to get him to take a break. He also had a unique understanding that he wasn’t just printing, but he was printing a newspaper and that a community responsibility went with that.”

When asked what’s next for him, Lance joked, “hopefully not very much after this.”

“It’s been a lot of good years in those 23 years, you have bad years always, but it’s been nice watching the growth and the ways the paper has changed over the years,” he said. “As the processes got more modern, we did too. It was a good time.”