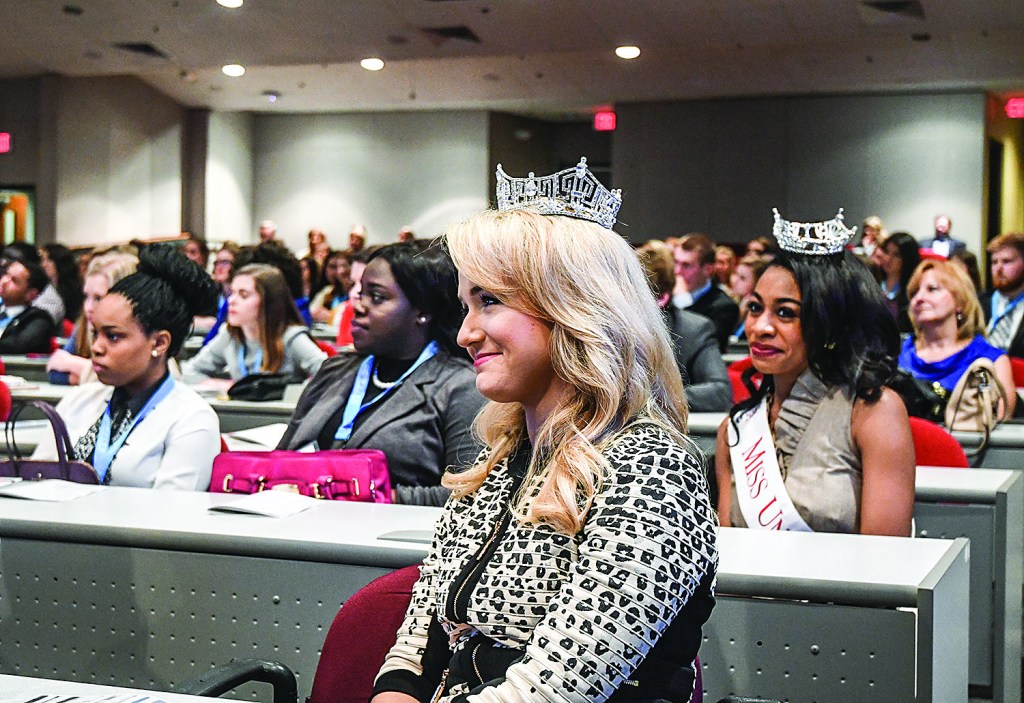 Miss America, Savvy Shields, speaks at the PULSE Leadership Conference at the Pharmacy Building at Ole Miss, in Oxford, Miss. on Friday, January 20, 2017.

The weekend-long PULSE Leadership Conference for undergraduate students kicked off at Ole Miss on Friday evening with two special guests in town.

Shields, 23, talked about her pageant history, her experience with Miss America and causes she supports.

“Every girl in Miss America has a platform,” Shields explained. “Whether that’s a charity or a political issue, it’s something that they’re passionate about. Mine is: eat better, live better. We’re trying to get people to take charge of their health.”

She elaborated on her past and how she would convince herself that she was not ready to compete in pageants.

Shields talked about the value of self-worth.

“Every single one of us has an obligation to let our light shine,” she said. “To find what sets our soul on fire and run with it. I’m a firm believer that we all have individual gifts so we can find what we’re passionate about and we can make a difference with it.”

Haskell followed Shields on stage and talked about the qualities of a leader. As someone who used to be a top tier agent for the William Morris Agency in Los Angeles, (where he eventually became the Worldwide Head of Television), Haskell had a lot of knowledge to dispense on the students.

He reflected on how he was able to save the “floundering” Miss America organization in 2005 and help it evolve into one of the top 10 television programs in the country over the course of 12 years. One of the keys in saving it, he says, was the relationships he built and maintained during his time in the industry.

“I started going to my friends in relationships that I had built through having leadership abilities,” he said. “When someone asks you what the most important thing you can have in your life is- relationships.”

Haskell concluded by saying true leaders should not get frustrated from criticism, but grow from it.

“If people criticize you, you must be doing something right,” he said. “Because if they aren’t, you aren’t doing anything at all.”