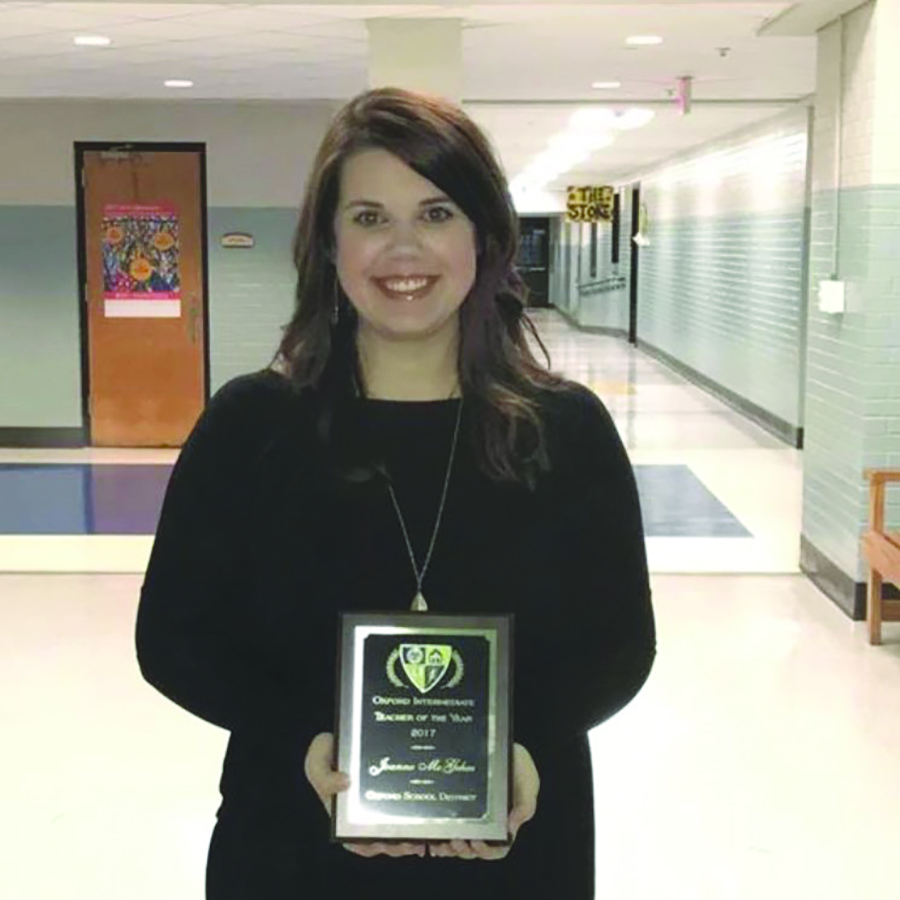 Joanne McGehee, a sixth grade teacher at Oxford Intermediate School, was named the school district Teacher of the Year.

It was a night of awards and celebrating success at the Oxford School Board meeting.

Oxford High senior Shawn Chao got the first award of the evening when he was named a Regeneron Science Scholar as part of the society’s prestigious annual competition.

Chao’s project that he entered was a numerical algorithm that detects algae, according to season, in the Mississippi Delta. Chao said that algae has been known to cause up to $82 million dollars a year in damage.

“My research will not be beneficial to just people in Mississippi, but around the United States and the world,” he added.

Following Chao’s recognition by the board, all of the teacher of the year recipients from each school were presented. Superintendent Brian Harvey then announced Joanne McGehee, a sixth grade science teacher at Oxford Intermediate, as the Teacher of the Year for the 2016-2017 school year.

McGehee gave a short speech where she said she was “honored to be nominated by the people that I work with. But it’s also such an honor to represent our district. We have the best students, teachers and parents.”

Harvey then announced the recipient for the Faculty Member of the Year as LaTonya Robinson, the principal at Della Davidson Elementary.

Robinson arrived in the school district five and a half years ago, where she started at Oxford Elementary. Robinson has a bachelor’s and master’s degree from Ole Miss.

“The result of her work at (Della Davidson) and the staff that she’s put together has been tremendous,” Harvey said. “She is passionate. If you’re in her building, and walking around with her, there’s no telling how many children she hugs along the way.”

Della Davidson Elementary is currently ranked as the second non-high school in the state.

Similar to McGehee, Robinson thanked all the teachers, parents and students who surround her at work.

“It’s all them, it’s not me” she said. “I’m just happy to be alongside the genius I work with in the building.”