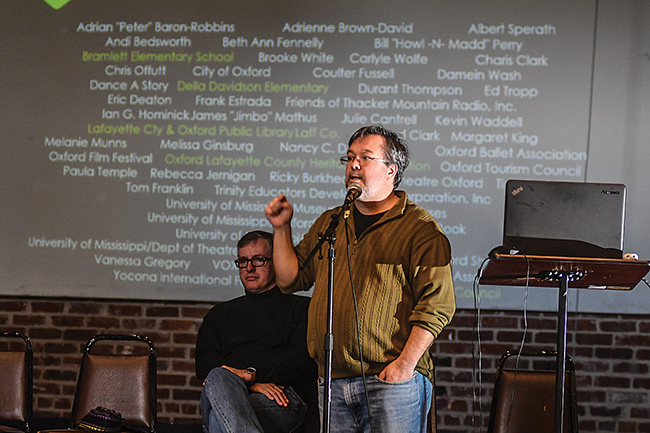 Wayne Andrews speaks as the Yoknapatawpha Arts Council hosted a meeting concerning the recent bill to move Mississippi Arts Commission under the purview of the Mississippi Development Authority, at the Powerhouse Community Arts Center in Oxford, Miss. on Sunday, January 29, 2017.

After news of two legislative bills (House Bill 1325 and Senate Bill 2611) that would disband the Mississippi Arts Commission and put it under the auspices of the Mississippi Development Authority got out, some in the Oxford community want to take action against it.

A meeting was held Sunday afternoon at The Powerhouse to discuss a plan for concerned citizens to voice their opinions to representatives.

Wayne Andrews, the director of the Yoknapatawpha Arts Council, spoke to the crowded room about why the bills would be harmful to the arts in Oxford and the rest of Mississippi.

“The claim is that it’s all about efficiency and it will save money,” he said. “What it will actually do is dissolve the Arts Commission and make the grants process political. The bill will eliminate the agency that is about promoting the creative economy. It’s not going to save them any money.”

Andrews noted that apart from the arts, the MAC grants also go to schools and public libraries, among other institutions.

“You’ve got to get in front of (representatives) and say, ‘we value the arts,’” he added. “We’ve got to call family and friends and tell them to do it. This has got to be a flood of people telling the legislators this is important and this is the wrong move.”

He presented a recent economic study that the YAC conducted where they found that 200,000 people last year directly took part in arts events in the county.

“That’s two football weekends,” he concluded. “If you love football and the impact that it has, we’re two football games. This isn’t just about the beauty of art, this is money. This is what the arts does, it brings people here. It supports our businesses. If you’re a business owner, you want the arts.”

Representative Jay Hughes, who is opposed to the bills, also took the stage to speak about what Oxonians can do.

“The arts is one thing that Mississippi does great and the last thing we need to do is leave politicians in charge of that,” he said, before continuing about how to best reach representatives and senators. “Email blasts and online petitions seem to be a lot less effective. Be respectful and please put your name (if you’re writing a message or text). Being anonymous doesn’t help anything.”

Hughes also said that this is not a partisan issue, but rather a Mississippi issue.

State Senator Gray Tollison, who spoke out against the bill last week, finished up the meeting by echoing Hughes’ statements about trying to make contact with politicians.

“The thing that matters is personal contact,” he said. “We need to go beyond the city lines of Oxford and Lafayette County and make sure everyone is engaged across the state.”

For those who would like contact info for their representatives’ contact information, send an email to mac4ms@gmail.com and in return, you will receive a list of names and numbers. Hughes said that the deadline for action is Tuesday at midnight.