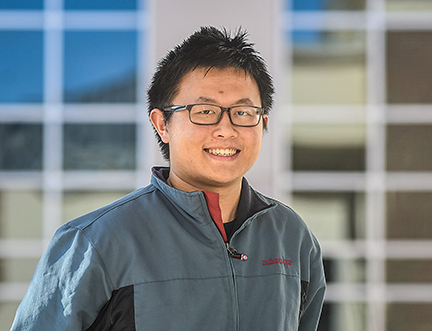 The senior recently was named a semi-finalist in the Regeneron Science Talent Search which won him prize money and recognition from the prestigious science society.

For his project, Chao developed a numerical algorithm to compute algae concentrations which he says can cause massive (and expensive) problems for the state of Mississippi, particularly in the Gulf and Delta regions. Algae can suck out all the oxygen from a body of water or cover the surface layer, blocking much needed sunlight for organisms below.

“Growing up, my favorite subject was always math,” Chao said. “That was something I excelled at through elementary and middle school. I then got interested in computational modeling. The environment to me has always been really important. When I heard about algal blooms being such a big problem in Mississippi, I was thinking, what can I do to mitigate this problem?”

Working in conjunction with Dr. Douglas Shields, Chao set out to develop this algorithm back in December 2015, a research process which he says is still ongoing.

Chao first heard about the Regeneron competition (which used to be sponsored up until this year by Intel), from an Oxford High student who was also named a semi-finalist four years ago. He says that his teachers at the school have also served as inspirations, particularly science teacher James Reidy.

“He pushed me to do my best,” Chao added. “When I took AP Physics with him sophomore year, he really challenged me with difficult conceptual physics problems. That helped me develop my intuition, not just with science we learn at school, but in research in general.”

When Chao was announced as a semi-finalist, he says it came as a surprise.

“When I submitted my research project, I knew I’d have to be really lucky to be a semi-finalist,” he said. “I was just really happy that I could put Oxford High School and Mississippi on the national stage. We don’t get a lot of representation at these national competitions.”

Though he hasn’t decided on a college yet after graduation this spring, Chao says he’s looking to get into economics and applied math.

“I’m also thinking about working on computational modeling in the economics field where they model stock prices or the prices of different products and how different political decisions can affect the market,” he said.