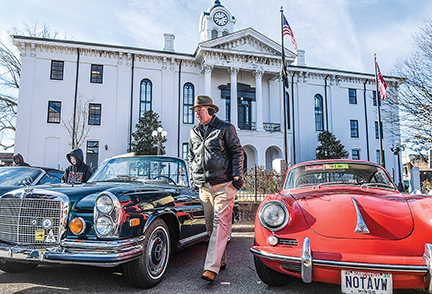 Monty Monteith looks over cars that will be in a show on Memorial Day weekend that are lined up outside the Lafayette County Courthouse on Saturday.

A handful of classic European cars were parked on the Square yesterday, but in a few months many more will be making their way to Oxford.

The 1st Annual Renaissance Classic Euro Fest Car and Motorcycle Show will be coming to the Lawn at the Community Pavilion at the intersection of University Avenue and Bramlett Blvd. An estimated 75 vehicles are expected to be entered into the festival.

The cars being showcased include Mercedes-Benz, Rolls-Royce, Volkswagen and Ferrari models. At least five different European countries will be displayed from enthusiasts from nine states.

The founder of the show, Mike Marsh, first had the idea for it eight years ago.

“I’m a classic vintage Mercedes collector, and in this part of the country, there were no shows that emphasized European cars,” says Marsh.

Marsh approached the Renaissance Center in Ridgeland, Mississippi with the concept for the car show and they agreed to host it. The success of the first iteration has turned it into an annual event in Ridgeland for the past eight years.

The show was brought to Natchez for their bicentennial celebration and found similar success. Marsh says he has wanted to bring the show to Oxford some time.

“Oxford is a very historical community that has a great venue,” he said. “I contacted Visit Oxford and they knew about the success in Natchez. They took it to their board, and the board approved it.”

To enter a car in the show, the vehicle must be 25 years or older and built prior to 1982. More information can be found online at euro-fest.net.

The show will be taking place on May 28 and will be free for all spectators.