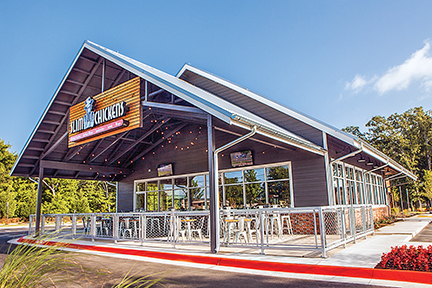 When Slim Chickens opens its doors, it will not only be the first location in town, but the first one in Mississippi.

Franchisee David Bagwell, who also franchises multiple Sonic locations, says that the condensed menu at Slim Chickens is vastly different than what he’s used to with his original restaurants. Where the former focuses on burgers, hot dogs and fried chicken, Slim Chickens chooses to hone in on poultry. Their menu showcases tenders, sandwiches and chicken salads.

“The simplicity of the Slim Chickens concept was very appealing to us and the company shares a lot of the ideals that we have for our personal business,” he said, adding that a friend initially convinced him to look into the brand.

A Mississippi native and Mississippi State grad, Bagwell got into the restaurant industry 30 years ago.

Bagwell admits that while he likes Oxford, before he was looking to open up the Slim Chickens in town, he didn’t spend much time here since he had “no reason to come (this) way.”

It wasn’t until Bagwell’s father visited Oxford a few weeks ago and relayed to him the potential benefits of having a business in Oxford that Bagwell decided it would be a good idea.

“There’s a lot of development going on there,” Bagwell said. “We fell in love with the town when we came up there and saw it.”

Bagwell has an agreement with Slim Chickens to eventually open six restaurants in the state and he estimates that the Oxford location won’t be open until late spring or early summer.

“We’d love to open up before the students leave for the summer,” he said. “We don’t think it would be a problem though since Ole Miss does have a great summer school program. We’re trying to get it done as quickly as possible.”

Started in Fayetteville, Arkansas in 2003, Slim Chickens currently has over 60 restaurants nationwide.