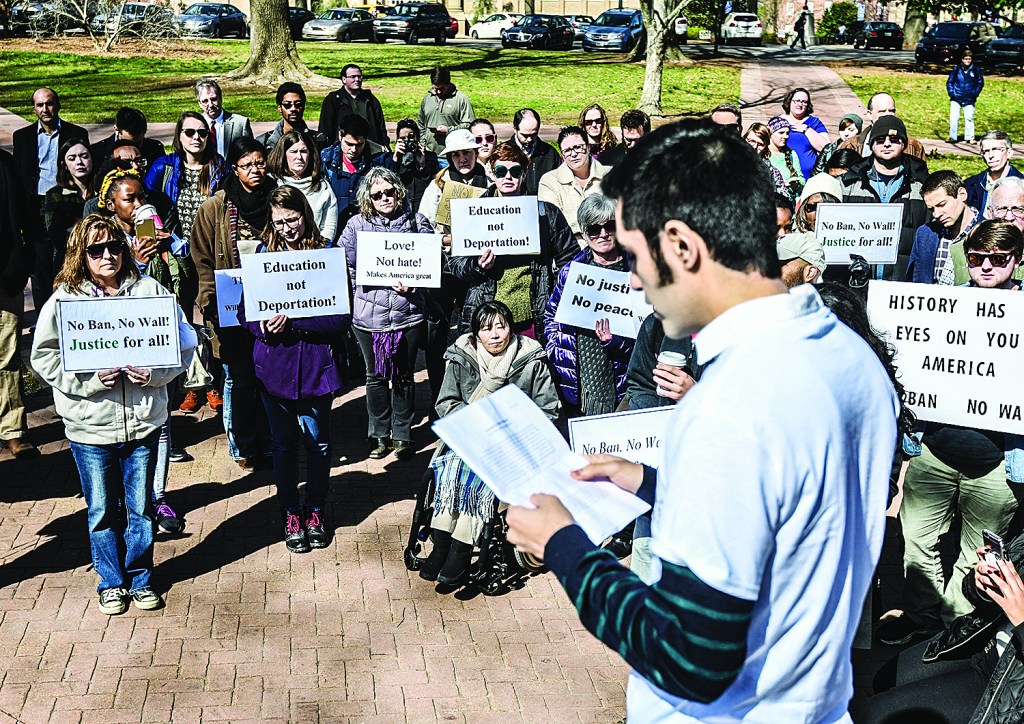 A small crowd listens to a speaker during a travel ban protest in the Circle at Ole Miss, in Oxford, Miss. on Thursday, February 9, 2017.

After President Trump’s Executive Order that barred travel from seven Middle Eastern countries, many students and professors on the Ole Miss campus were upset about the decision.

A protest was held in front of the Lyceum yesterday and featured student speakers as well as faculty.

One of the speakers, UM NAACP President Tysianna Marino, gave an impassioned speech to the gathering crowd.

“It’s important that we continue to stand together in solidarity and continue to fight together for the equality of everybody,” she said. “I’m so sorry that this is happening and you have our full support in any way.”

An estimated 26 students and 11 faculty were affected by Trump’s travel ban in a statement released by Chancellor Jeffrey Vitter last week.

Later Thursday, the 9th U.S. Circuit Court of Appeals refused to reinstate the order, unanimously rejecting the administration’s claim of presidential authority, questioning its motives and concluding that the order was unlikely to survive legal challenges.

In a rebuke to the Trump administration Thursday, the three federal appellate judges sided with the states of Washington and Minnesota on nearly every matter, opening the possibility that the case could shift to the U.S. Supreme Court.

The lower court action so far is temporary and hasn’t resolved broader questions about the legality of Trump’s order. While the ban is on hold, refugees and people from seven majority-Muslim nations identified in the president’s Jan. 27 executive order can continue traveling to the U.S.

The Associated Press contributed to this article.