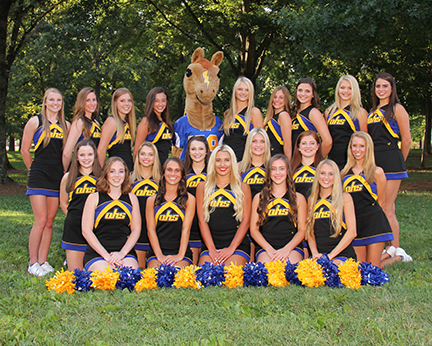 The Oxford High School cheerleaders have boosted the town’s morale more than usual.

This past weekend, the team won a national championship from the Universal Cheer Association in Orlando, Florida.

Nicole Roberson, one of the co-coaches of the team, described the experience as “a dream come true.”

“Most cheerleaders grow up watching the championships on ESPN and dreaming of the opportunity to be on that stage,” she said. “We have been blessed with the opportunity with the ability to qualify for the national championship these last two years, but being able to win the championship still seems so surreal. Getting to watch our girls’ faces as ‘Oxford High School’ was called was an amazing moment that none of us will be able to forget.”

Roberson’s coaching counterpart, Allison Walley, says that this championship title has been in the works for some time in a process that started last May after tryouts. The girls worked three days a week all summer working on stunts and training at the Ole Miss campus in June. Ole Miss cheerleading coach  Trey Griffin also helped the girls refine their routine as a stunt consultant. Walley says that OHS also brought in Melissa Scott, a well-known routine “cleaner”, who happens to have a daughter on the squad.

“We had a goal of finishing in the top three when we got here,” Walley said. “We felt like that was reasonable after finishing fifth last year. After making it to finals, we found out we were in second place in semi-finals after a routine that we knew wasn’t our best performance. At that point, I knew in my heart they could win it.”

Walley added that during the finals, the squad hit every move perfectly.

“We had to wait three hours for the awards ceremony,” she said. “When we were finally announced as the winners, our girls went crazy, along with their families and coaches. I am so proud of them. They have worked so hard and sacrificed so much.”

“I can tell you these young ladies work just as hard as any other athletic team that we have on campus,” he said. “They go year-round and they work year-round. It’s exciting to be able to see all of their hard work pay off in winning this national championship.”