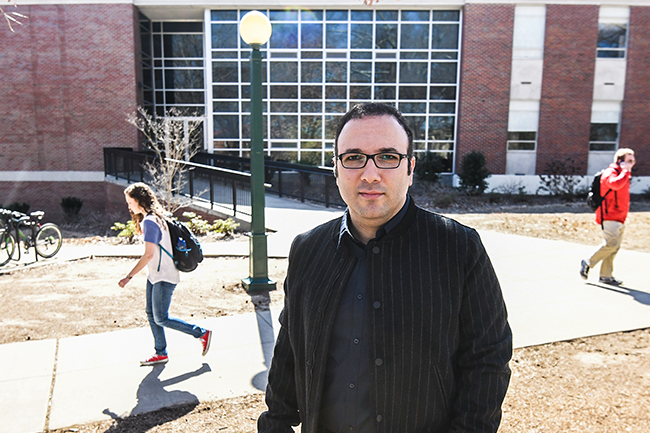 Farhad Farzbod, outside of Carrier Hall at the University of Mississippi, in Oxford, Miss. on Friday, February 17, 2017, is an assistant professor in mechanical engineering from Iran.

For an estimated 26 students and 11 faculty members on the University of Mississippi campus, the ban directly affected them, too.

Vahid Naderyan, an Iranian PhD student in Physics who has been in Mississippi since 2012, says he was shocked when he first heard about the EO.

“After many months of trying to schedule an interview for my parents to come visit me, I was eventually able to set an appointment for them in the US Embassy in Armenia for March,” Naderyan said. “I was very excited that I would be able to see my parents after a few years; it was very important for me mentally and emotionally. However, because of the travel ban EO, their interview was canceled. I couldn’t sleep for two nights.”

The travel ban was eventually rescinded for a time following numerous court litigations. During a February 16 press conference, Trump stated that he planned to enact a new Order that he believes can withstand court challenges.

While Naderyan can now visit with his parents, what lies ahead remains unclear for him and many other students in similar positions.

“The travel ban made innocent people suffer and separated families and friends,” Naderyan said. “Because of the instability these days that directly affects our lives, many of my friends are already thinking about moving to other countries.

These days, instead of focusing on their research and studies, they are regularly and stressfully checking the news.”

Dr. Farhad Farzbod, an assistant professor in the department of mechanical engineering, says that he was similarly taken aback when he heard news of the EO.

“(I thought) that it had political motivations behind it, I’d like to see decisions that are made based on facts and statistics,” Farzbod said. “I also thought that this is only the beginning, it might never end up to be internment camps, but it still felt dangerously close when the green card holders were denied entry. It is a form of guilt by association.”

Farzbod, who is also from Iran and earned three graduate degrees from Georgia Tech, believes that Trump’s order would have the opposite of its intended effect in the long run.

“I believe that the main pillar of America, which made us so strong, is not the hard power, it is the soft power; the idea of freedom and liberty, equal justice for all and separation of church and state,” he said.

Among the people standing by the affected students and faculty members are those who protested the presidential ruling in front of the Lyceum on February 9. Dr. Mary F. Thurlkill, an associate professor of religion at the university, was one of the featured speakers that day.

“Extremist groups argue that Islam fights a defensive war against powers that want to destroy it,” she said. “The EO directly cedes that narrative, demonstrating America’s hate for Islam, providing propaganda for such groups. And it wasn’t just Middle Eastern groups that recognized the order for the hateful rhetoric it was. Countries around the world scorned the order as both racist and xenophobic.”

Despite an uncertain future, Naderyan says that he’s grateful for his friends (both American or otherwise) who have reached out to him.

“I received overwhelming calls and messages from friends expressing their feelings and their support, some of them I have had not been in contact with for years,” he said. “It was amazing. I personally have always received a very positive and welcoming reception from people in the U.S. and at Ole Miss. I am a big fan of the culture and hospitality of Mississippians. I have fallen in love with Mississippi.”