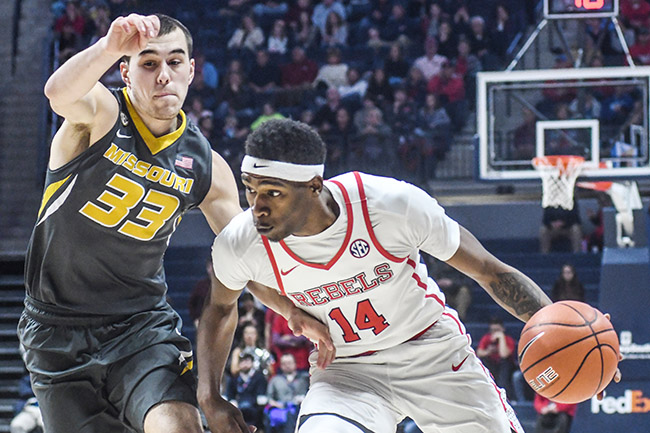 Ole Miss will be playing for its postseason life over the next week.

Even if it may be the NIT.

The Rebels will wrap up the regular season at home tonight against South Carolina (7:30 p.m., SEC Network) before all 14 Southeastern Conference teams convene in Nashville, Tennessee, for the SEC Tournament starting Wednesday. Ole Miss (18-12, 9-8 SEC) has a bye into Thursday as one of the top 10 seeds, though exactly where the Rebels will fall won’t be determined until today’s games are over.

Ole Miss would be the No. 7 seed if the tournament started today but could be as high as No. 6 or as low as No. 9. But the Rebels may need a couple more wins to ensure themselves of playing beyond next week.

Ole Miss had won six of eight before suffering a 70-55 loss at Alabama on Wednesday, a setback that dropped the Rebels to 4-12 against top-100 RPI teams with just one of those wins coming against the top 50. It’s not a resume worthy of NCAA Tournament at-large consideration, meaning Ole Miss will have to automatically qualify by winning the SEC Tournament if it wants to be part of the Big Dance.

The NIT is the only other postseason tournament Ole Miss would play in if it receives a bid, a team spokesman said, but opinions on how firm the Rebels’ spot is in that field differ. NYCBuckets.com has Ole Miss as a 3 seed while DRatings.com projects the Rebels as a 5 seed.

But Ole Miss, which has an RPI of 79, could find itself in danger of missing out on the postseason all together if it loses to the Gamecocks (22-8, 12-5) and goes one and done in Nashville. The NIT consists of 32 teams, and some of the bids will go to regular-season champions from mid-major conferences that automatically qualify should they not make the NCAA Tournament.

Saiz, the SEC’s active career leader in double-doubles, is the only player in the league averaging a double-double (14.9 points, 10.8 rebounds) this season. A four-year starter, Saiz is one of only two players in program history with 1,000 points and 900 rebounds in a career.

Brooks is averaging seven points, 2.7 rebounds and 1.4 assists per game. A two-year member of the program after transferring from Southwest Tennessee Community College, Brooks has returned to play in nine of the Rebels’ last 10 games after suffering a seizure against Tennessee on Jan. 17.

Ole Miss shut out in first game of Shriners…