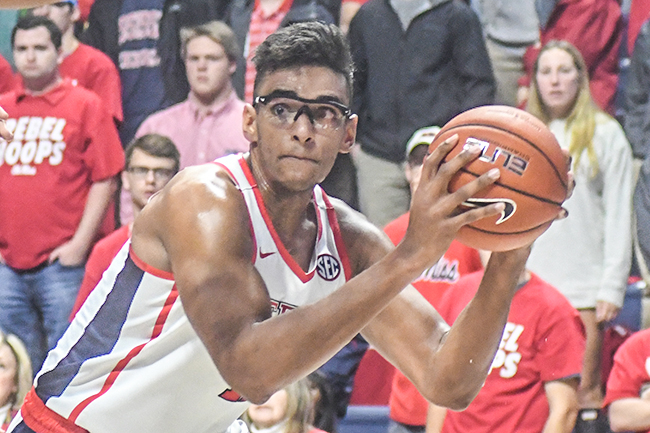 The postseason honors continue to roll in for Sebastian Saiz.

Ole Miss’ senior forward was a first-team All-Southeastern Conference selection Tuesday as voted on by The Associated Press. Saiz was also voted first-team All-SEC by the league’s coaches.

Saiz, the only player in the league averaging a double-double with 15.1 points and 10.9 rebounds, was the lone Ole Miss representative on the teams. The accolades come a day after the 6-foot-9 Spaniard  won the Howell Trophy as the best men’s college basketball player in Mississippi.

The SEC’s career active rebounding leader, Saiz recorded his league-leading 19th double-double of the season Saturday with 21 points and 15 boards in the Rebels’ 75-70 win over South Carolina, helping Ole Miss (19-12) clinch the No. 6 seed in this week’s SEC Tournament. Ole Miss will play late Thursday night against either Auburn or Missouri at Bridgestone Arena in Nashville, Tennessee.

Saiz has 28 double-doubles for his career and is one of only two players in Ole Miss history to tally 1,000 points and 900 rebounds in a career.

Monk, one of Kentucky’s latest freshman phenoms, was also voted SEC Player of the Year and Newcomer of the Year. He and Thornwell lead the league in scoring at 21.2 points a game while Monk’s 41-percent clip from 3-point range is also tops in the conference.

Florida’s Mike White took Coach of the Year honors after spearheading the Gators’ turnaround. Florida finished runner-up to Kentucky in the SEC’s regular season with a 24-7 record and will end its two-year NCAA Tournament drought under the former Ole Miss assistant, who’s in his second season at the helm.