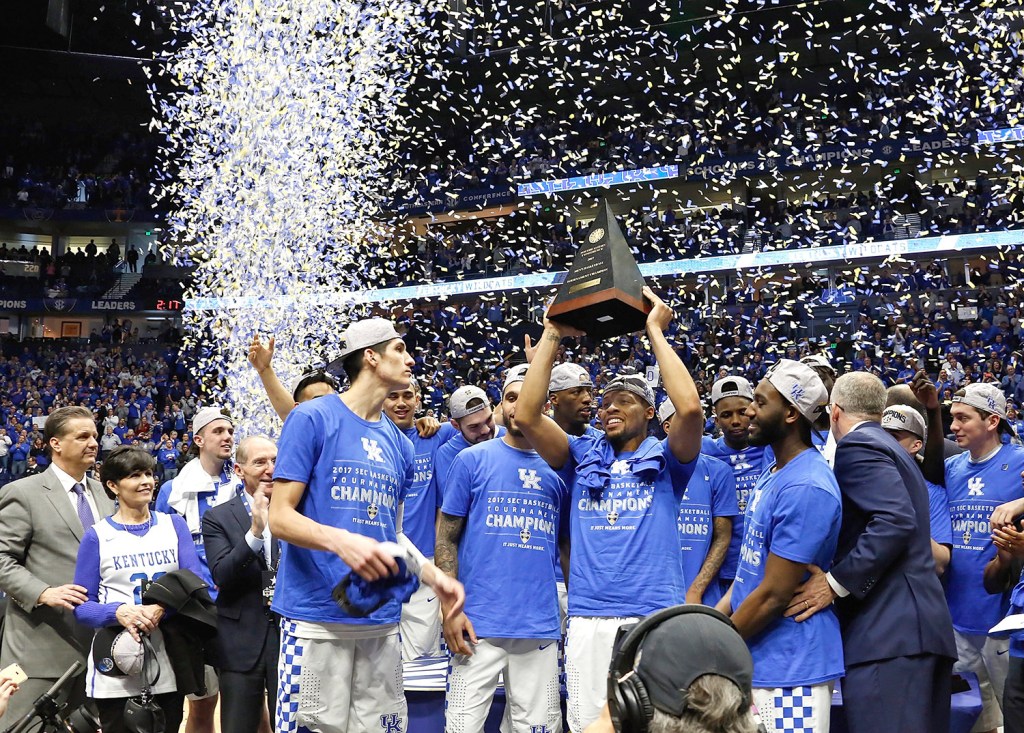 Confetti rains down as Kentucky's Isaiah Briscoe holds up the SEC Championship trophy with his teammates after an 82-65 victory over Arkansas to win the SEC Tournament championship at Bridgestone Arena on Sunday in Nashville, Tenn. (Frederick Breedon/Getty Images)

De’Aaron Fox scored 18 points, Malik Monk and Bam Adebayo each had 17, and No. 8 Kentucky won its third straight league tournament championship with an 82-65 win over Arkansas on Sunday at Bridgestone Arena.

“This was a good tournament,” Kentucky coach John Calipari said. “(Arkansas) is a good team. We came in and made some good plays at the end of the (first) half to get up, and we kind of held on.”

Kentucky (29-5), which claimed its 31st conference tournament title, beat the Razorbacks in the tournament final for the second time in three years and won their 11th game in a row in a matchup of two of the hotter teams in the country, likely cementing its position as a No. 2 seed in the upcoming NCAA Tournament. Arkansas (25-9), which will also be dancing, lost for just the second time in its last 10 games.

Daryl Macon led Arkansas with 18 points while Dusty Hannahs and Jaylen Barford scored 14 and 13, respectively, for the Razorbacks, but it wasn’t nearly enough to keep up with the hot-shooting Wildcats, who also got a career-high 14 points from senior Dominique Hawkins off the bench.

Kentucky shot 61 percent (17 of 28) in the first half and didn’t cool off much, extending its lead to as many as 19 in the second. Arkansas cut it to nine with 1:30 left, but the Wildcats hit six straight free throws with the help of a couple of flagarant fouls by Arkansas to put it out of reach.

“Both teams going at it and getting after it, and sometimes the temperament gets out of hand,” Arkansas coach Mike Anderson said. “It was unfortunate, but at the same time, I don’t think anybody was intent on trying to hurt anybody.

“Our guys fought to the bitter end and came up a little short.”

The Wildcats dominated the glass with a 40-26 rebounding advantage and held Arkansas to 22 percent (4 of 18) from the 3-point line.

Adebayo won the matchup inside with Arkansas’ Moses Kingsley, who didn’t score until the 17:58 mark of the second half and was ejected late for his flagarant foul on Fox. Adebayo pulled down nine rebounds and had 10 of his points in the first half, finishing 5 of 9 from the field.

“Bam had one rebound at halftime and ends up with nine,” Calipari said. “Does that mean he should be getting 15, 16 a game? Probably, but our guard play has been good.”

Monk and Fox, who was named tournament MVP, combined to make half of their 22 shots from the floor, and there wasn’t much of a dropoff with Hawkins when Fox had to go the bench in the middle portions of the game with foul trouble. Hawkins went 5 of 9 from the field and made two of his 5 3-pointers, one coming during a 9-0 run at the end of the first half that put Kentucky up 42-30 and began the Wildcats’ surge toward their latest championship.

“I’ve been here for all four years and to the finals each of the four years as well, but I’ve never had a role that I did today,” Hawkins said. “I felt like I took advantage of my playing time today.”