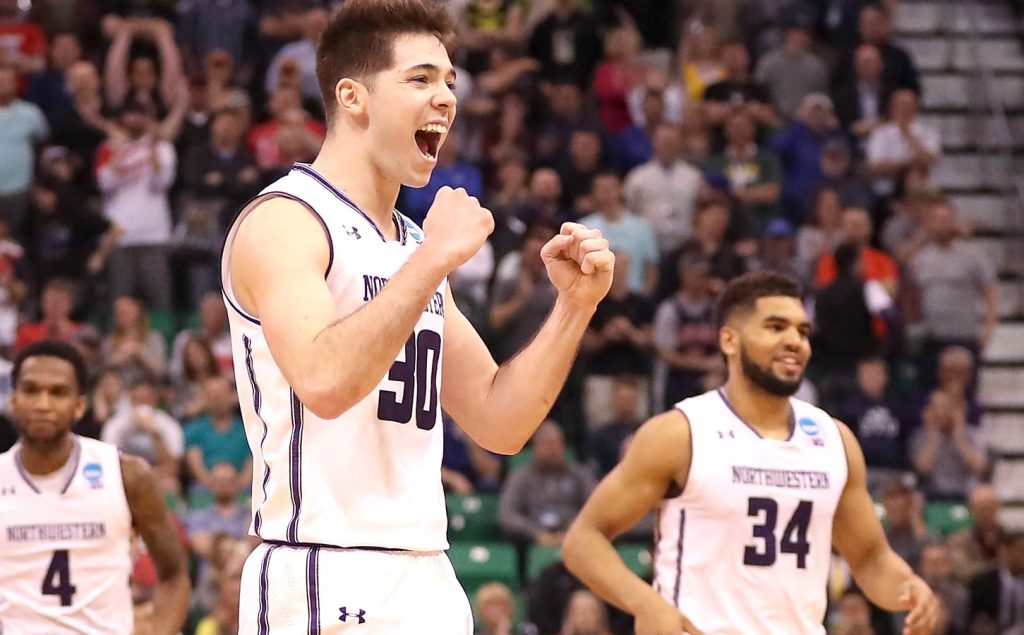 Northwestern's Bryant McIntosh (30) celebrates with teammates after defeating the Vanderbilt Commodores during the first round of the NCAA Men's Basketball Tournament at Vivint Smart Home Arena on Thursday, March 16, 2017 in Salt Lake City, Utah. The Wildcats won 68-66 in their first-ever NCAA Tournament game. (Christian Petersen/Getty Images)

Riley LaChance made a layup with 18 seconds remaining to put the ninth-seeded Commodores up by one after trailing by as many as 15.

But seconds after the in-bounds pass, Fisher-Davis reached out and grabbed McIntosh while he was in the backcourt. That put eighth-seeded Northwestern in the double bonus, and McIntosh went to the line and calmly swished the free throws with 15 seconds left.

ORLANDO, Fla. — Dwayne Bacon scored 25 points and Jonathan Isaac added 17 points and 10 rebounds to help the third-seeded Florida State Seminoles hold off No. 14 Florida Gulf Coast in the first round of the NCAA Tournament.

The Seminoles (26-8), making their first appearance since 2012 in the NCAAs, advanced on in the West Region.

The Eagles (26-8) saw their tournament hopes end in the first round for the second straight year. But FGCU made it interesting in the waning moments as the Seminoles let a sizeable lead slip away because of missed free throws and untimely fouls.

SALT LAKE CITY — Freshman Lauri Markkanen scored 20 points as No. 1-seeded Arizona cruised to victory over No. 15 North Dakota in the first round of the NCAA’s West Regional.

Allonzo Trier continued his late-season success and had a highlight tomahawk dunk to push the lead to 44-27. He finished with 18.

ORLANDO, Fla. — Trevon Bluiett scored 21 points and Sean O’Mara had 18 to help No. 11 seed Xavier upset sixth-seeded Maryland during the first round of the NCAA Tournament.

The Musketeers move on in the West region, marking the third straight year they have advanced to the second round. Maryland, which has started three freshmen for much the season, lost in the first round for the first time since 1997.

After a slow start, Bluiett came through with 18 second-half points to help the Musketeers rally from an early 6-point deficit. Bluiett converted seven field goals, including five 3-pointers to energize Xavier.

The West Region’s 12th-seeded Tigers had a chance to pull ahead on their final possession, but Devin Cannady missed an open 3-pointer just before the final horn. Notre Dame’s Steve Vasturia pulled down the rebound and was fouled.

The Fighting Irish (26-9) nearly squandered an 11-point second half lead. Guard Matt Farrell scored 16 points, but missed the front end of a one-and-one with Notre Dame up 59-58.

SALT LAKE CITY — Jordan Mathews scored 16 points to help Gonzaga slowly pull away from South Dakota State and avoid the first 1 vs. 16 upset in the history of the NCAA Tournament.

It looked possible for a while.

The Jackrabbits (18-17), champions of the Summit League, led for the first 17 minutes of Thursday’s game in the West region and stayed in range for most of the game.

BUFFALO, N.Y. — Nathan Adrian had 12 points and 10 rebounds, leading West Virginia over Bucknell in the first round of the NCAA Tournament.

This win sets up a meeting against the region’s fifth-seeded Notre Dame Fighting Irish, who hung on for a 60-58 win over Princeton earlier on Thursday.

SALT LAKE CITY — Jock Landale had 18 points and 13 rebounds as seventh-seeded Saint Mary’s held on for a victory over No. 10 Virginia Commonwealth in the opening round of the NCAA Tournament’s West Region.

The Gaels led most of the way, but had to fight to hold on after the VCU defensive pressure started to become too much in the second half.

MILWAUKEE — Avery Woodson scored 18 points and tied a career high with six 3-pointers in his NCAA Tournament debut to lead Butler over Winthrop.

Woodson, a graduate transfer from Memphis, hit five 3s in the first half to help the fourth-seeded Bulldogs build a 14-point halftime lead.

A 12-2 run in the middle of the second half gave Butler a 60-43 lead with less than 8 minutes left and put the game out of reach for the 13th-seeded Eagles.

Twelfth-seeded Middle Tennessee proved it was no one-year wonder after upsetting Michigan State as a No. 15 seed last March.

The Blue Raiders (31-4) instead played like seasoned NCAA veterans with the way they held off the Gophers’ comeback attempt from a 17-point deficit in front of a loud and large contingent of Minnesota fans.

BUFFALO, N.Y. — Donte DiVincenzo scored 21 points and NCAA Tournament top seed Villanova shook off a slow start and stumbled forward in the East region with a victory over No. 16 seed Mount St. Mary’s.

The Wildcats (32-3) weren’t themselves for much of the first half before they opened the second half with a 21-6 run to take the first step toward defending their championship. Villanova is trying to be the first back-to-back titlist since Florida in 2007.

Since the NCAA went to seeding in 1985, No. 1 seeds are 130-0 against No. 16s. The historic upset remains elusive, but for a while it looked like it could happen inside KeyBank Center.

ORLANDO, Fla. — London Perrantes scored 24 points, Marial Shayok added a career-high 23 off the bench and No. 5 seed Virginia rallied from 15 points down to beat 13th-seeded UNC Wilmington in the opening round of the NCAA Tournament.

Perrantes scored 19 points in the second half as the Cavaliers (23-10) got their slow-paced offense going. His biggest bucket was a driving bank shot with 1:37 remaining, which put the Cavs up 71-66.

UNCW (29-6) wouldn’t go away, though. Chris Flemmings drained a 3-pointer from the elbow and then Devontae Cacok hit a layup to make it 73-71 with less than a minute to play. But Shayok answered on the other end, banking in a runner that gave the Cavs some breathing room in the closing seconds.

ORLANDO, Fla. — Devin Robinson tied his career-high with 24 points, Kasey Hill added 14 and No. 4 seed Florida used a second-half surge to beat 13th-seeded East Tennessee State in the opening round of the NCAA Tournament.

Robinson, an NBA prospect who had been relatively quiet late in the season, scored his most points in nearly two months. He made 10 of 17 shots and chipped in seven rebounds. The speedy Hill reached double figures for the fourth consecutive game. He also added six rebounds and five assists for his most complete game in a month.

Kevarrius Hayes, filling in for injured center John Egbunu, finished with seven points, seven rebounds and six steals. He broke the school record for steals in an NCAA Tournament game.

BUFFALO, N.Y. — Bronson Koenig made a school record eight 3-pointers and scored 28 points and Nigel Hayes added 16 as NCAA Tournament-tested Wisconsin advanced in the East Region with a victory over Virginia Tech.

The eighth-seeded Badgers (26-9) made all the big plays in the closing minutes to set up a meeting with top-seeded Villanova on Saturday. The Wildcats shook off a sluggish and strange first half and downed Mount St. Mary’s 76-56.

No team understands the survive-and-advance mentality in this tourney better than Wisconsin, the only team in the country to make the Sweet 16 the past three years.

MILWAUKEE — Vincent Edwards scored 15 of his 21 points in the second half, and Purdue held off Vermont for its first victory in the NCAA Tournament in five years.

Caleb Swanigan added 16 points, 14 rebounds and four assists for the fourth-seeded Boilermakers (26-7), who were upset by Arkansas-Little Rock in double overtime in the first round of last year’s tournament. Dakota Mathias made three of Purdue’s nine 3-pointers and finished with 13 points.

It was Vermont’s first loss this calendar year. The Catamounts (29-6), the regular-season and tournament champions in the America East, had the nation’s longest active win streak at 21 games.

MILWAUKEE — Monte Morris had 19 points, eight rebounds and eight assists, and Iowa State outlasted Nevada to advance to the second round of the NCAA Tournament for the second straight year.

Deonte Burton added 14 points and eight rebounds as the fifth-seeded Cyclones won for the 10th time in their last 11 games, building off their impressive run through the Big 12 Tournament. Naz Mitrou-Long and Matt Thomas had 13 points apiece.

Iowa State (24-10) will try for its third Sweet 16 appearance in four years when it takes on No. 4 seed Purdue on Saturday.