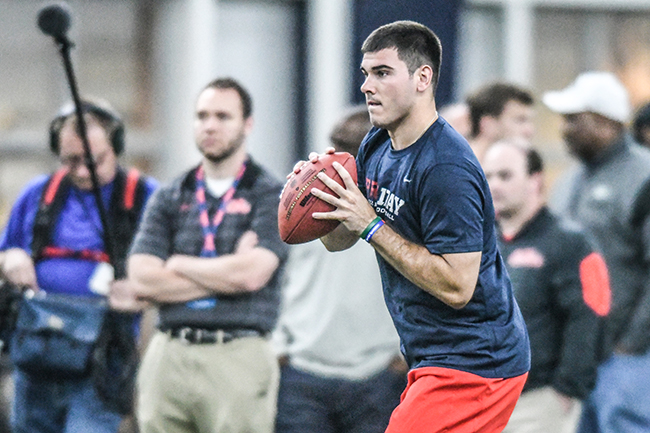 Chad Kelly went through his workout at Ole Miss’ pro day with a bulky brace on his right knee. By the time it was over, he had an ice pack on his wrist to go with it.

Kelly’s audition for an NFL job isn’t going the way he envisioned.

The former Ole Miss quarterback aggravated a sprained throwing wrist while throwing one of his handful of passes before leaving Monday’s workout early to be examined by a specialist. Kelly did not return to complete his throwing session in front of NFL personnel.

“It’s very frustrating,” Kelly said. “I’ve worked really hard for the past five months to really hone in on this day. You go through adversity and you get through it, and you can only change the future.”

Kelly said he initially hurt the wrist about a week ago while training. He’ll now throw for scouts on campus on April 22, an Ole Miss spokesperson said.

“It’s a bummer man,” wide receiver Damore’ea Stringfellow said. “You hate to see one of your guys go down, especially at a moment like this. Praying for him. I know he’s going to be good.”

It’s another setback for Kelly, who’s already viewed as a risk heading into this year’s NFL Draft because of other red flags. A second torn ACL cut his collegiate career short in early November, but Kelly, who’s four months removed from surgery, said he’s already been cleared for full contact, though his doctor has advised him to wait a couple more months before taking a hit.

Of course, off-field missteps are always a topic of conversation when Kelly’s the subject. Kelly said he’s still questioned about things that happened in high school.

Kelly took the junior college route to Ole Miss after being dismissed from Clemson in the spring of 2014. He was then arrested shortly after signing with Ole Miss in December of that year after an altercation with police in Buffalo, New York, which he eventually pleaded down to non-criminal disorderly conduct. He stayed out of trouble at Ole Miss, though he made headlines in October for running onto the field after a skirmish broke out at his brother’s high school football game.

“Every decision and everything you do is going to put under a microscope, and one bad thing can blow up just like that,” Kelly said. “I’ve just got to be smart with everything I do. Of course the past is going to come up.”

Reports surfaced earlier this year that Kelly’s invite to the NFL scouting combine in February was rescinded because of a league policy that prohibits draft-eligible players with misdemeanor or felony convictions involving violence to participate, though Kelly said the NFL never actually gave him a reason as to why the invitation was pulled.

But Kelly is looking to the future. He said he’s got visits with “a couple teams” set up this week, though his representation didn’t want those teams revealed.

Despite the gaudy numbers he put up at Ole Miss — he accounted for 7,632 total yards and 65 touchdowns in just two seasons with the Rebels — Kelly is ranked by NFLDraftScout.com as the 238th overall prospect for the draft, which begins April 27 in Philadelphia. The draft has 253 selections.

“You just never know,” Kelly said. “I really don’t care. I just want an opportunity to show what I can do.”