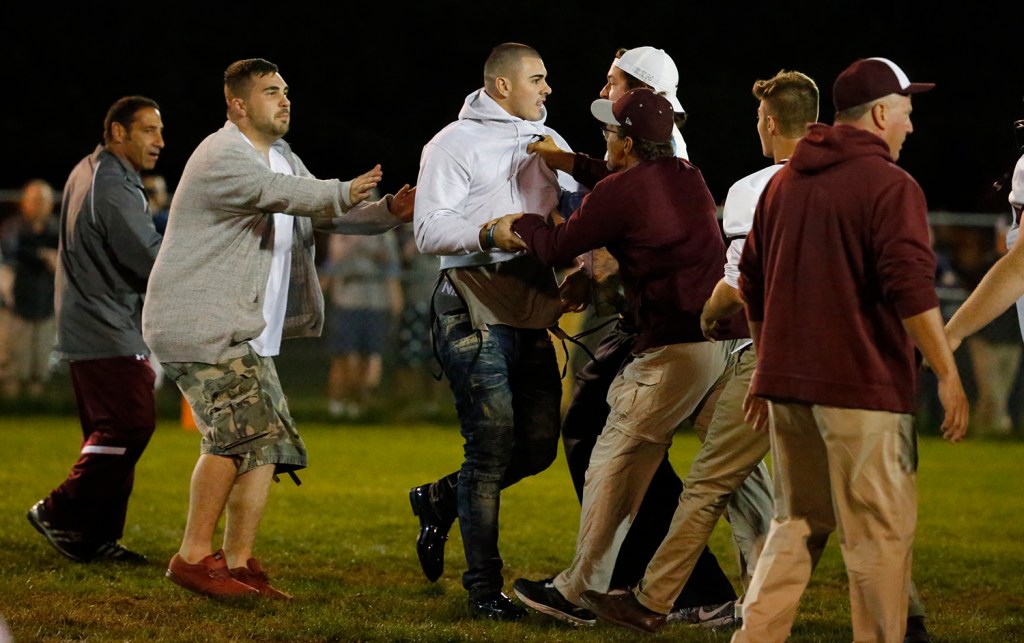 St. Joe's alumni and Ole Missippi quarterback Chad Kelly is restrained after leaving the stands to come to the aid of his brother, Casey, who was involved in an altercation with the Timon bench during second quarter action at Tiff farms on Friday,Oct. 7, 2016. (Harry Scull Jr./Buffalo News)

Ole Miss quarterback Chad Kelly had to be restrained after a scuffle broke out at a high school football game Friday between Bishop Timon-St. Jude and St. Joseph’s Collegiate Institute in New York.

Kelly, who was in attendance watching his younger brother, St. Joe’s quarterback Casey Kelly, reportedly ran onto the field during a bench-clearing brawl that broke out on top of Casey Kelly after he was hit late out of bounds. Kelly, a Buffalo, New York native who also played his high school ball at St. Joe’s, made the trip back home with the Rebels having an open date.

Buffalo’s WIVB-TV News 4 got part of the skirmish on video, which shows Chad Kelly at the beginning running across the field but doesn’t show him again until the end when he’s being pushed back toward St. Joe’s sideline by coaches. The game was suspended.

“I have talked to Chad and his family,” Ole Miss coach Hugh Freeze said in a statement late Friday night. “He understands that he should have handled this situation with his brother differently. He has apologized, and we will continue to address this when he returns to campus.”

For context, fight started literally on top of Chad’s brother, Casey, who took late hit. Chad was on the field after shoving escalated.

Here is some of Timon/Joes brawl… Chad Kelly ran across field to opposing bench(early in vid), later gets pushed back to sideline. pic.twitter.com/HkEa8Ki9jJ

HUGE brawl just now at Timon/Joes. Casey Kelly hit late out of bounds, benches clear… Chad Kelly ran onto field and had to be restrained.