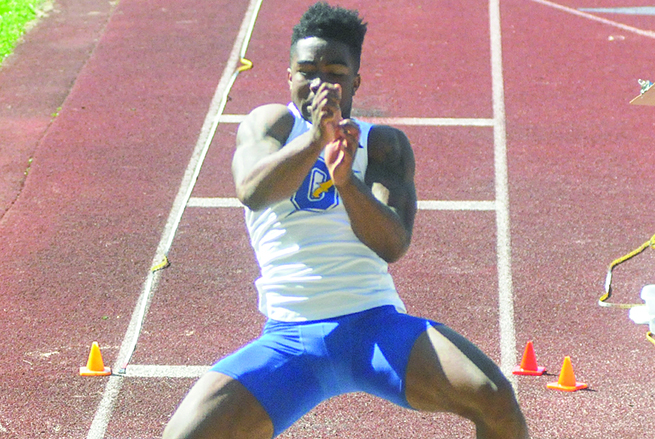 It was another track meet, and it was another dominant performance by the Oxford High track teams with the Chargers dominating the 2017 Oxford EAGLE Invitational at Bobby Holcomb Field on Saturday.

The host team came away with a clean sweep with the boys picking up 265 points and finishing 42 points ahead of second-place Senatobia (223). Independence (103) and North Panola (50.5) rounded out the results.

The Oxford boys had 12 first-place finishes out of 18 events. The Chargers fared well in the field events with five first-place results. D.Q. Thomas won the discus throw, defeating teammate Quentin Wilfawn, who placed second. Eric Jeffries won the shot put with Wilfawn finding runner-up in that event as well.

After taking the discus event, Thomas claimed the triple jump with a jump of 43 feet, 2 inches. Devin Rockette won the long jump with an attempt of 22-08.5 and teammate Tyrese Ivy claimed second. Jackson Dear won the pole vault, clearing 11-01.

It was more of the same in the afternoon session of track events with Oxford winning seven events. Two of the four relays went to the Chargers, winning the 4×100 and 4×200 relays. Senatobia claimed the 4×400 and 4×800 relays with Oxford placing runner-up in each.

In the 300-meter hurdles, Jared Redding claimed first with a personal record time of 41.53 seconds. Redding also placed second in the 110-meter hurdles. John Owen Yoste won the 3200-meter run. In the dashes, Ivy won the 400 meters and Jaquan Webb won the 100- and 200-meter runs.

“I was very proud of how the guys competed throughout the whole meet,” Oxford track coach Chris Bush said. “I had a lot of (personal records) across the board. We played with some of our events. We took some of our heavy hitters off relays and put them in some individual events just so they could get some times and see how they’d do.”

Girls cruise
There was never any doubt if the Oxford girls team would come away with the meet title, claiming 14 of the 18 events.

Three first-place finishes came from the field events. Charlie Kendricks won the pole vault with a height cleared of 9-06. Elizabeth Duperier claimed second in the event. Monya Baskins won the shot put with a throw of 32-feet even. In the high jump, Kathleen Patton won with a jump of 5-08, besting teammate Kyla Johnson by two inches for first place.

In the track events, it was a clean sweep of all four relay races by Oxford. Ashley Epps won the 100- and 300-meter hurdles. In the dashes, Kadijah Ramsey won the 100 meters while Jakiara Dunn won the 400-meter race.

In the longer distance races, Swayze Elliott won the 800-meter run with Addie Thompson sweeping the 1600- and 3200-meter runs.

“The girls did good,” Bush said. “We made some transition moves with Ashley Epps doing some hurdles. Relays are very consistent. (Girls coach Chris Patton) is working on some strategy with where he wants to put the girls heading into state.”

The push for Pearl and the state meets, which take place on May 5-6, begins this week with district meets taking place.