Shoplifting a concern on the Square 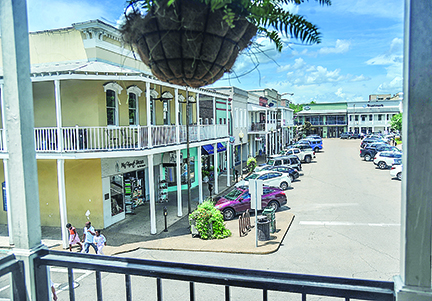 Parking spaces around the Oxford Square may get turned into outdoor dining areas for the next three months. The City of Oxford met with restaurant owners this week to discuss the idea and gauge their interest. (Bruce Newman/Oxford Eagle)

According to numerous managers and owners of businesses on the Square, shoplifting has been a big issue as of late.
A meeting was held on Friday morning in the Chancery Building with Detective Lieutenant Chris Case of the Oxford Police Department and members of the Oxford Square Alliance so that they could discuss methods for reducing the crime in their stores.
“I do think your clerks really need to engage them when they come in,” Case said. “‘Hi, how you doing, can I help you?’ Walk around and talk with them if you can. If they’re looking at your clerk a lot and picking up random things, there are some signs there that probably they’re there to do some kind of shoplifting.”
Mark Shoemake, of Hinton & Hinton, said that he’s no problem telling shoppers who enter the store with other bags to leave everything at the front.
Case agreed with this method but added that “sometimes that offends people … You might have someone coming in with a bag and they’re going to spend $5,000.”
If a shoplifter is clearly seen filching an item from a store, Case said the shopkeeper has every right to demand the item back. He said that if they need to approach a supposed shoplifter, to speak them “plain and simple.”Juvenile shoplifters become an issue on the Square during Spring Break and the summer, Case said.
Perhaps the detective lieutenant’s biggest suggestion to the Square Alliance was to install cameras.
“Put up signs to tell people that everything is going to be caught on camera,” Case said. “These cameras are cheap, you can get them for way less than what you used to.”
One shopkeeper suggested that the Alliance establish a group text where they could trade information about suspicious individuals in the area.
Jeff Johnson, the owner of Nella and the organizer of the meeting, is dismayed at the current situation.
“It’s the world we live in here,” Johnson, said. “I never thought that on our pristine Square this would be an issue.”