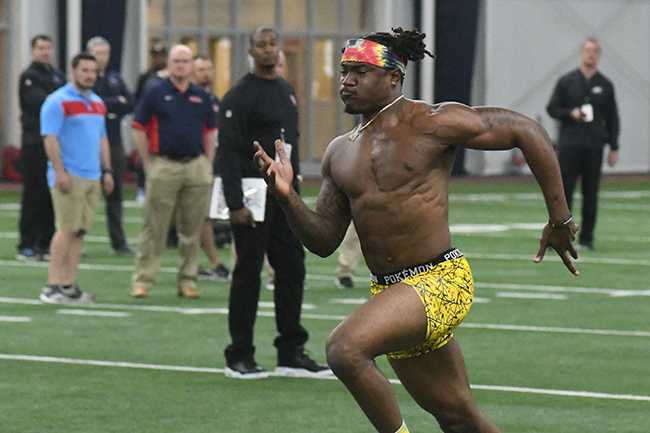 Damore’ea Stringfellow on Monday got his first opportunity to try to improve his stock for the upcoming NFL Draft, and Ole Miss’ former wide receiver felt like he took advantage of it.

Working out in front of scouts from 31 NFL teams at the school’s pro day, Stringfellow displayed the athleticism he hopes will secure his future. At 6-foot-2 and 220 pounds, the big-bodied wideout hit his goal of running the 40-yard dash in the 4.5-second range, clocking an unofficial 4.57, while posting a 38-inch vertical and a 10-10 broad jump. He also locked out 17 repetitions of 225 pounds on the bench press.

“Trying to work on that short-area stuff,” Stringfellow said. “I don’t think anybody expected me to run that fast in the 40, but it was all right. Just came to show out and have fun with it.

Stringfellow played two seasons after transferring from Washington and finished his career at Ole Miss with 82 catches for 1,219 yards and 11 touchdowns. His junior season was his most productive with 46 receptions for 716 yards and six scores.

After talking with his mother and other close family members, Stringfellow decided to skip his senior season and get his professional career started early even with questions lingering about his past.

Stringfellow left Washington after pleading guilty to two counts of fourth-degree assault and one count of third-degree malicious mischief — all misdemeanors — stemming from an altercation with a female after the Seattle Seahawks’ Super Bowl win over the Denver Broncos on Feb. 2, 2014. It’s why Stringfellow wasn’t invited to the scouting combine earlier this year by the NFL, which has a policy prohibiting draft-eligible players who have misdemeanor or felony convictions involving violence from participating.

“That’s everybody’s dream,” Stringfellow said. “Every player who wants to be great wants to go to the combine and show out. When I didn’t get an invite, I actually had a little chip on my shoulder.”

But plenty of teams are interested in his skill set. Stringfellow said he’ll soon leave to visit with teams and won’t be done until April 16, estimating he’ll be traveling to meet with “probably 15 teams.”

Teams have already asked about the incident, which reportedly left the female briefly unconscious, and Stringfellow knows the questions aren’t going to stop. His answers, he said, are candid.

“I tell them the story. It’s just me being honest,” Stringfellow said. “They already know honestly, so I just tell them what happened I guess.”

It’s a big reason why Stringfellow is ranked as the No. 36 receiver prospect by NFLDraftScout.com with a seventh-round grade for this year’s draft, which begins April 27 in Philadelphia. But Stringfellow hopes to show teams what else he can offer before then, including the cerebral side of his game.

“Everybody wants to see what I can do on the board, so just looking forward to that,” he said.