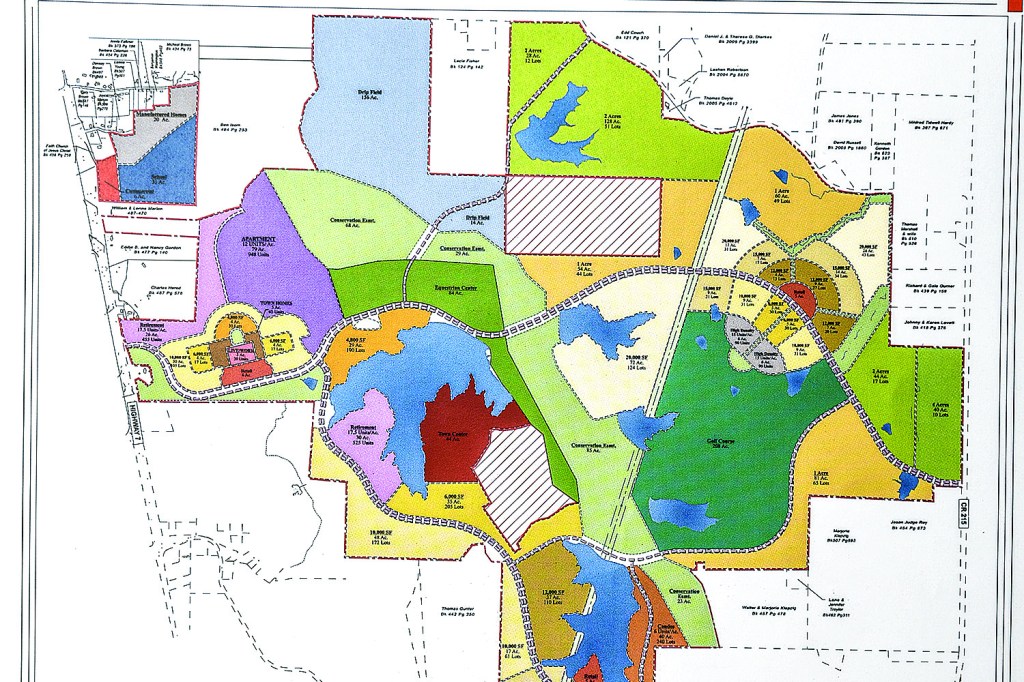 Abbeville, a town of approximately 450 residents, could see a population and economic growth explosion over the next decade and city officials are preparing for the expected boom.

Mayor Scott Fricker said Monday that the town has received a couple of grants for infrastructure upgrades and recently completed a waterline project that added about a dozen fire hydrants that will lower the town’s fire rating. The recently formed planning commission also brought a zoning package before the town aldermen to review before public meetings are held regarding zoning.

The town also adopted building code regulations and has an inter-local agreement with Lafayette County that should be in place by the Fall to utilize building inspector Joel Hollowell’s office.

But one of the biggest projects that could impact the town is outside the city limits where developers are working to create the massive Oxford Springs project.

For more than a year, local architect Corey Alger and developers Lamar Adams and Patrick Sands have been creating a master plan for the proposed Oxford Springs development south of Abbeville. The massive 2,600-acre project, once completed, is expected to make a significant impact on Abbeville, something Fricker and town leaders welcome.

“It will be a good project. Good for the county and the town of Abbeville,” Fricker said.

The benefits of Oxford Springs will be felt directly and indirectly.

According to Fricker, the developers will run about 8,000 feet of water line to Abbeville to access the town’s water system that will feed initially 65 lots on the north end of Oxford Springs.

“We have agreed to supply water to that part of the project,” Fricker said. He believes that capacity will increase in the future.

Fricker is convinced Oxford Springs will become a reality, but also realizes it won’t happen over night.

“I know they’re going to get it done,” Fricker said. “They’re going at a pace that won’t be breakneck speed, but they’re not just dragging around either. They’re going to move forward in an orderly and responsible manner.”

For more than two years, the developers have been processing the property and making site analysis.

In November 2015, Alger went before the Lafayette County Planning Commission to inform officials that developers Adams and Sands planned to create the development and put to rest rumors that were circulating in the community. Many were wondering if the development would be similar to the previous planned development that would have been so massive some believed it would be incorporated.

“In a nice way, its trash,” Alger said at the time about the plan the previous developers had devised. “The previous plan, we feel wasn’t really based in reality.

Last month, Alger went before the county planning commission to give a presentation with maps and update county officials of what developers plan to create, as well as gain information on the process in developing the project.

According to Alger, the development will include an 85-acre equestrian center, golf course, 44-acre town center, townhomes, condos, apartments and 200 acres of lakes, as well as approximately 200 acres of undeveloped conservation easement.

The first phase is comprised of the equestrian center and 125 acres in the northern portion of the development. Alger said the project has met criteria from the Army Corps of Engineers. The developers are still in conversations in providing water to the southern end of the development.

Currently, the developers are working to get their “ducks in a row” before they make a formal request for approval on the first phase in front of the county planning commission. The question Alger and county officials have is if the huge project falls under the county subdivision regulations or is a planned unit development (PUD)

Oxford Springs also has the infrastructure for natural gas, which Fricker sees could be a benefit for Abbeville.

“The developers have agreed to donate a spot of land for a natural gas station that we could tie into,” Fricker said. “It will help us with the prospect of natural gas.”