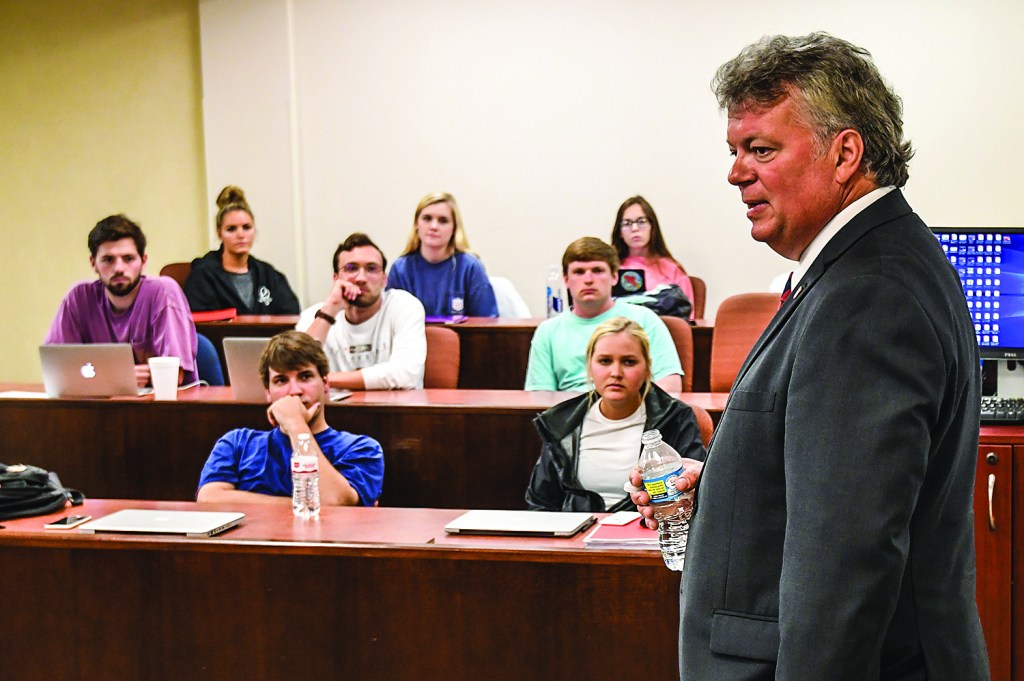 State Attorney General Jim Hood visited the Overby Center Tuesday on the Ole Miss campus to discuss an array of topics from the state of politics in Jackson to mental health care in Mississippi.

Hood, a democrat who has been the state’s attorney general since 2004 and rumored to be a candidate for governor, opened his talk by saying, “he normally doesn’t give political speeches.”

“The legislature is acting like Congress,” Hood said. “The partisan divide is worse than I recall having seen in my lifetime. They’re doing things that don’t make logical sense. When they say, ‘we’re doing this,’ it’s usually about the money. Campaign contributions underlie so much of politics today. People are concerned more about politics than policy.”

When opining about the state’s current economic situation, Hood said that, “when working people are working, that’s when you lift the economy.”

“That was an easy one that (Mississippi legislators) missed the last two years,” he added. “There was another one that was about the expansion of Medicaid. Eleven million dollars, 11,000 jobs in Mississippi that we completely missed out on. That would have helped in the medical community. And if you don’t care about what it good it does for people who need it the most, then you don’t care about the economics of it.”

The attorney general is also a proponent of the state pre-funding Pre-K education, believing that it would ultimately benefit the economy.

“It would be the greatest thing and economic health for the state of Mississippi since 1982 when we funded Kindergartens,” Hood said. “The statistics are there. A child ages three to five, about 85 percent of development occurs in their brain during that period. If someone is reading to them, their vocabulary exponentially increases.”

Hood also spoke out against a state grocery tax since it would widely affect cities where most grocery stores are situated.

“You’d have to affect the system to allow the state to refund those cities and counties it would have an impact on,” he said. “That’s something we’d have to work on. If the economy’s moving, then naturally you can do more with less because you’re having more revenue coming in. This present leadership that we have, that’s probably the furthest issue from their mind.”

Perhaps the issue that Hood focused on most was how the state handles mental health care. He expressed regret for sending drug cases to penitentiaries when most of the individuals had mental health issues and were self-medicating.

“They didn’t have money to pay to go to a doctor to get a legal controlled substance that they could use to have an effect on their mental health,” Hood said. “That’s been going on for a long time in Mississippi. If you’re capable of living out in a community then you have a right to healthcare in the community. You can’t just warehouse people in an institution.”

While Hood joked he’s “a lawyer and not an economic developer,” he spoke about tax cuts in Mississippi, saying that they’re the reason why the state is “in a ditch.”

“(Legislators) gave our state treasury away in tax cuts,” he said. “They gave away $350 million in the last five years. And our deficit is $335 million right now, that’s huge for a state like ours. Tax cuts do not grow the economy, that’s been proven time and time again.”

Hood said that “(Mississippi has) been digging in this hole for years now.”

“What happens when you tap every source?” he asked. “That’s what our legislation has done. Our borrowing has shot up by billions of dollars, our ratings are going down because we’re paying more interest on it. Our whole economic outlook has fallen because of the policies that they’ve implemented over the past 16 years.”