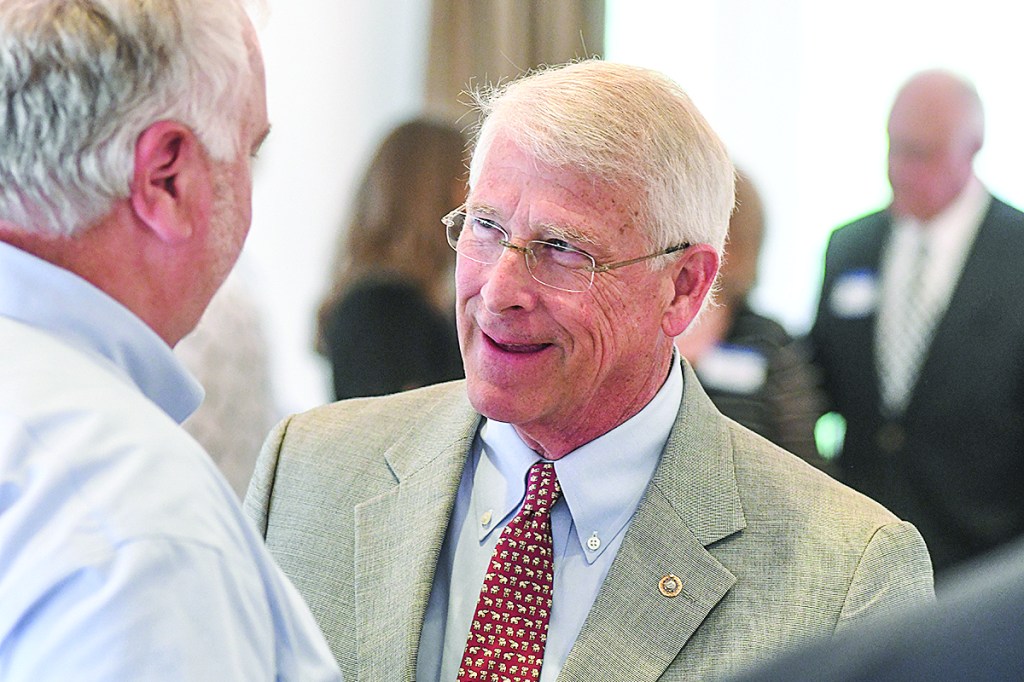 U.S. Senator Roger Wicker was the hot topic of conversation for local political groups in Oxford, on both sides of the political spectrum.

Tuesday morning, The Oxford Pachyderm Club, a new group for republicans, held its inaugural meeting with speeches from Ward 6 Alderman candidate Jason Bailey and Wicker (R-Miss.) at the Country Club of Oxford.

Bailey, who is running for re-election, took the podium first. The incumbent alderman spoke about how Oxford has been evolving over the past 20 years since he graduated from Oxford High School in 1997.

“We had 509 new building permits come up last year,” Bailey said. “The total valuation was $285 million in new construction in Oxford. Right now, we have 1,082 hotel rooms. One thing we haven’t been doing is asking for federal funds.”

He then spoke directly to Wicker who was seated in front of him.

When Wicker spoke, he praised the recent confirming of Neil Gorsuch to the Supreme Court and a recent trip that he made with his wife, Gayle, to Israel. There, he met with Michael Oren, the former Israeli Ambassador to the United States.

“He had been in the last campaign against (current Israeli Prime Minister) Netanyahu,” Wicker said. “He lost, but they did a strange thing that we might find interesting in the United States. They decided, we’re not a member of this party anymore, we’re all Israelis. This opponent of Netanyahu was now part of the government. What Orin told us was a plea for American leadership in the Middle East.”

Wicker then went on to praise President Trump’s recent missile strikes against Syria and how The Jerusalem Post lauded the attack as well.

“I think our Israeli and Sunni allies in the Middle East are glad to see America coming back to a leadership position,” the senator said. “Syria’s complicated: we want to defeat ISIS, Assad wants to defeat ISIS. We worry about Russia and Iran, but Assad is a client of (both). It’s very complicated and we need to be cautious. This absence of American leadership is a thing of the past.”

Wicker also believes that Trump is “making progress” in his new position.

“I did not view this election as complicated,” Wicker said. “This election was about the Supreme Court, national defense, border security, the Second Amendment and it was about jobs for America.”

A small business owner at the Pachyderm meeting asked Wicker about his views on healthcare.

Wicker closed his Q&A by answering a Pachyderm member’s question about what Trump has done in terms of promoting religious freedom. The senator replied that appointing Gorsuch was, again, a good move.

“I think what (Gorsuch) understands is that the First Amendment is a lot more than freedom of worship,” Wicker said. “In Russia or China, they’ll let you go to church. Even if someone had an idea that might seem foolish to the rest of the world, if that is your religious belief, then, in my opinion, it’s under the Constitution that you have a right to practice.”

Later that evening, a “town hall” meeting was held at the Oxford Conference Center by a group of concerned citizens as part of Action Together Oxford. This past February, the group sought to hold a meeting with senators Wicker, Thad Cochran and Representative Trent Kelly about issues that are important to them. None of the officials were present at that meeting nor at last night’s gathering.

Jennifer Mizenko, who spearheads Action Together Oxford, spoke at the meeting last night. She also had a chance to speak with Senator Wicker earlier in the day after the Pachyderm meeting.

Mizenko says she has been trying to contact the senators for months to schedule a meeting.

“We sent a video of the whole meeting we had (back in February),” she added. “We said you need to hear from all of your constituents and not just some of them. We are all part of Mississippi and we all need to be heard. Since that time, it’s been every week, giving them a call. Last week I emailed (Wicker’s scheduling team) and I finally got a response that said he’s not available.”

As Wicker left the Pachyderm meeting, Mizenko said that he agreed to a meeting that is “balanced.” Mizenko plans to contact the League of Women Voters to schedule an event with them.

Looking back on Action Together’s February meeting, Mizenko says it was “cathartic” to hear from a lot of people who felt the same way as her.

“Now we know we need to take action as opposed to just standing around and talking,” Mizenko said. “We hope people leave tonight with action plans because actions make a difference. We can talk all we want. I feel like if they don’t show up, this is the time for us to make plans. Not everybody in Mississippi has the same view and we all need to be represented equally. And if we’re not, we’re going to work to change our representation.”