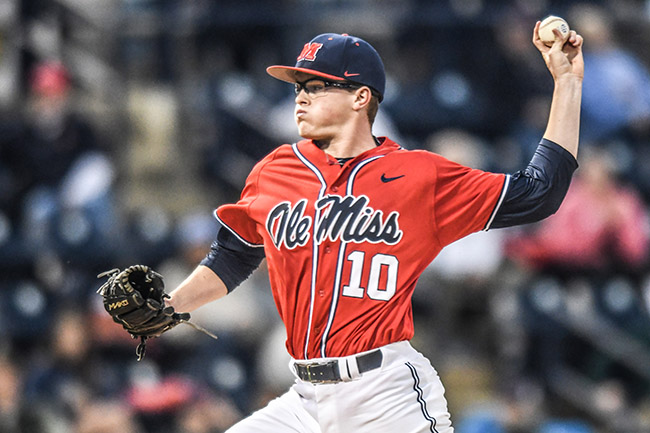 No. 15 Arkansas pushed across three late runs with the help of some shaky defense from the Rebels to notch a 7-4 win Friday in the nightcap of a doubleheader at Baum Stadium that ended the teams’ series a day earlier than originally scheduled.

Ole Miss took the series with a 4-1 win in the first game. The teams played a twinbill with the threat of inclement weather Saturday.

Tate Blackman led off the game with a homer and also had a double for Ole Miss (27-17, 11-10), which had its four-game winning streak in league play snapped. Thomas Dillard went 2-for-4 with a solo shot of his own while Colby Bortles had his second multi-hit game of the series with his RBI single tying it at 4 in the seventh inning.

Arkansas (34-12, 13-8) answered with three runs in the eighth against reliever Will Stokes (1-1), who gave up three hits in his only inning of work. Each run was unearned as two errors in the frame helped the Razorbacks.

Ole Miss put a pair of runners on to get the tying run to the plate in the ninth, but Cannon Chadwick retired the three batters he faced to close it out. Ole Miss left-hander David Parkinson lasted just 4 2/3 innings after allowing four earned runs on four hits, two of them being home runs, while walking three and striking out five.

The Rebels led 3-0 after two innings before Arkansas trimmed the deficit in the third with Grant Koch’s two-run homer. Chad Spanberger went deep in the fifth to draw the Razorbacks even before Koch chased Parkinson two batters later with an RBI double.

Jake Reindl (2-0) scattered six hits, walked three and struck out five in 6 1/3 innings of relief to get the win.

Ole Miss will return to Swayze Field on Tuesday for the first of two midweek games against Louisiana-Monroe. First pitch is set for 6:30 p.m.