Trip to No. 7 Florida gives Ole Miss next resume-building opportunity 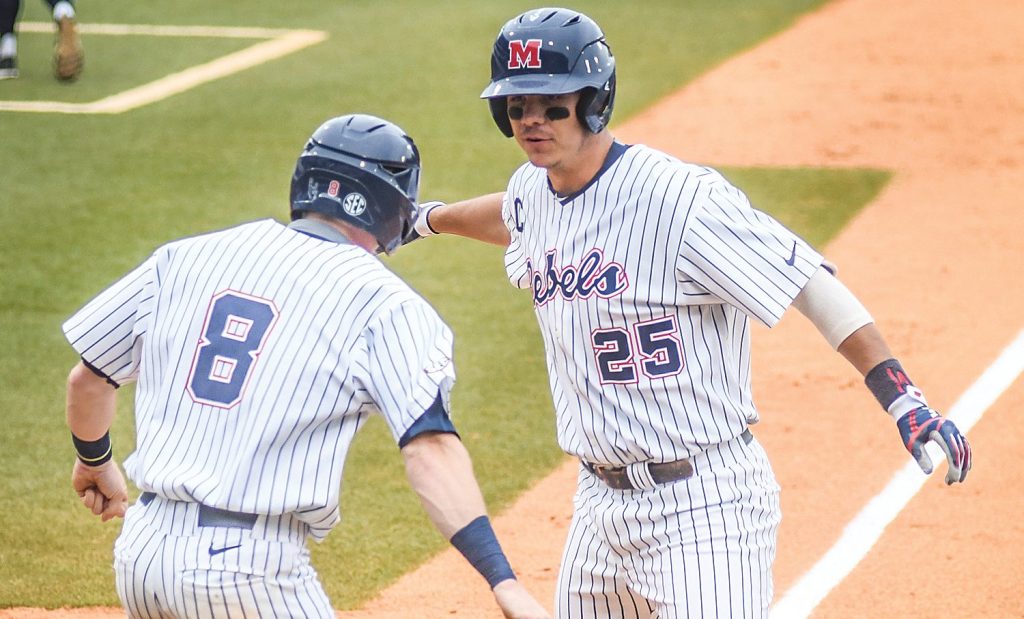 Regardless of how they came, wins over Louisiana-Monroe this week weren’t going to do anything to help Ole Miss’ postseason chances.

A couple of wins this weekend would.

With three series left in Southeastern Conference play before the top 12 teams convene in Hoover for the conference tournament, Ole Miss’ next chance to strengthen its resume for an at-large bid in the NCAA Tournament starts tonight against No. 7 Florida in the second of three road series the Rebels will play in a span of four weeks. First pitch is set for 5:30 p.m.

Saturday’s game will also start at 5:30 p.m. First pitch for Sunday’s finale is set for 1 p.m.

The Rebels (29-17, 11-10 SEC) have won seven of their last 10 games, including a midweek sweep of ULM in which they outscored the Warhawks 26-10, but playing a sub-200 RPI opponent actually dropped Ole Miss’ RPI a spot to 35. But it’s their series win at then-No. 14 Arkansas last weekend that has the Rebels feeling good about themselves heading into another one against a top-15 opponent.

“If you go on the road and win a series, it takes a lot of pressure off,” pitcher Sean Johnson said. “We’re going to need these wins this weekend. I think it’s going to lead to some confidence going into Florida for sure.”

Ole Miss is a game above .500 in league play and likely needs to finish the regular season even or better in the conference to assure itself of a regional berth, but nobody has a tougher stretch of games remaining. The Rebels will return home next weekend against No. 15 Texas A&M before rounding out the regular season with a trip to No. 4 Auburn — teams that combine with Florida for a 40-23 record in league play. It’s the highest opponents’ league winning percentage left on any team’s schedule.

Baseball America and D1Baseball.com both have the Rebels as a 3 seed in their latest projected NCAA Tournament fields. Alabama and Kentucky each missed the tournament last year with 15-15 league records, but both had RPIs in the 60s. Auburn got in at 13-17 the year before that while Texas A&M and Kentucky each made the field at 14-16 in 2014, but all three teams had top-30 RPIs.

“We have all the confidence in the world in our team and the success we’re having,” third baseman Colby Bortles said. “We’re looking forward to going down to Gainesville and winning.”

It’s two of the SEC’s top three pitching staffs going against the league’s two worst offenses in terms of batting average, but Bortles said an Ole Miss lineup that’s showed more life lately is ready for the challenge. The Rebels are averaging 7.4 runs over the last 10 games.

“One through nine, we’re all swinging it well,” Bortles said. “Doesn’t matter who Coach (Mike Bianco) puts in the lineup, we’re going to have good (at-bats). Everybody says get hot late and you can win a lot of games. It’s good for us, and we’ve got a lot of confidence moving forward.

“It’s a good team and a good ballclub that will always have good arms. From a hitter’s standpoint, we’re looking forward to seeing how good their arms are. We’re going to be ready.”

Olenek collided with shortstop Grae Kessinger while trying to catch a fly ball during Wednesday’s game against ULM and was removed after the fifth inning. Olenek, who’s started all 45 games for the Rebels, is hitting .261 with a team-best 15 doubles and 21 RBIs.

Kyle Watson finished Wednesday’s game for Olenek and is hitting .175 in 41 games, including 16 starts.