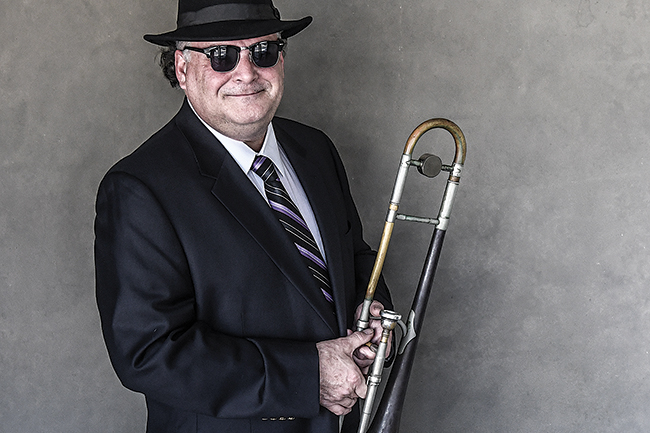 Jeff Callaway’s newest album with his jazz quintet, the Mo’tet, has been a long time coming; 17 years, to be exact.

A multi-instrumentalist, Callaway feels most at home on the trombone and played with the Mo’tet during the ‘90s.

“It was cool,” recalls Callaway, 54, while he talked on the balcony of Square Books. “Everybody dug it.”

The band did a recording session in April 2000, but the tapes were misplaced when the studio they were produced in, Tweed Recording, moved. Long forgotten about, the lost tapes were later rediscovered and are now being issued for the first time.

Callaway remarked how listeners have been comparing the album, “that wuz…the Mo’tet,” to records from the famed Blue Note jazz label.

“This record is a throwback to ‘60s and ‘70s Blue Note records,” Callaway acknowledged. “Live playing and not overproducing stuff. The band (at the time of recording) had not seen each other in six months. We showed up and we just ran through once — no rehearsal. It doesn’t get any more live, spontaneous or improvised.”

Though the record can be heard online, Callaway is also selling “that wuz…” in CD form. A medium that he realizes is far past its prime. To him, a CD is an “antique.”

With vinyl sales making a comeback in recent years, Callaway has hopes to eventually sell the album on wax, too.

As far as his trombone playing on “that wuz…”, Callaway jokes that he’s “the worst thing on the record.”

“I play little clams all the way through it,” he said, using the jazz lingo for missed notes. “When we recorded it and we listened to it, I thought I ruined it. Then six months later, we went back and listened to it we realized it was really good in spite of the clams. It was a great lesson to embrace the imperfections as being a part of the process.”

Born in Jackson, Callaway has played trombone since he was in sixth grade. It wasn’t until his 30s that he played professionally in two bands: a Blues Brothers cover band and a ‘30s and ‘40s Big Band. Through these connections, he was able to branch out and play with artists from various genres. Some, one might think, that wouldn’t need a trombone.

From taking the stage with local alt-rock country band Kudzu Kings to the Fat Possum-signed punk band The Neckbones, he has truly done it all.

“When I do a duet with Tate Moore (of the Kudzu Kings) and we’re playing country tunes, people don’t expect a trombone,” the trombonist said. “But when you play the fiddle part, it works. When you play blues, if you play the harmonica part, it works. The trick is to get out of the way enough, be in the moment and be exactly what the music needs. You can’t do it unless you’ve messed up and you learn what not to do.”

After settling in Oxford in 1983, Callaway says that he fell in with an artist crowd. He eventually became friends with some of the town’s icons like authors Larry Brown and Barry Hannah along with musician Jim Dickinson.

“They were my three gurus,” Callaway said. “Larry was the first guy that I met who took me seriously. He was as superb as it gets. The thing he taught me two main things.”

He remembers the most important thing that he learned from Brown was to never give up. A feat that can be challenging when in pursuit of the arts.

Callaway decided to fully chase his dreams after a car wreck in the Delta that happened 10 years ago. What should have been fatal, the musician said didn’t even leave a scratch on his body.

“In the end, you have to ‘follow your bliss,’” Callaway said, quoting writer Joseph Campbell. “What do you what you really want to do with your life? What do I want to pursue with complete dogged determination? For me, that’s being a creative artist. Not just a musician. Not just a trombone player. But to try and break those limits.”

In Callaway’s opinion, the arts are the only thing that can break through people’s defenses and preconceived ideas about the world, especially in a time when, “no one is listening to anyone else.”

“It’s the little mustard seed that gets through defense mechanisms,” he said. “If you think about the things that really influence who you are, it was probably a story, TV episode, movie or a song. Something that got in there and gave you someone else’s perspective. That’s why art is maybe the most important thing on earth.”

When he’s not playing the trombone, tuba, cornet, guitar or piano (among other instruments), Callaway embraces the other arts. He enjoys writing screenplays, and in a past career, he was a film and restaurant critic.

“Right now, I’m an antique dealer,” he said, indicating his CD on the table next to him. “There are people that like antiques, but it’s a niche. This will be available online, but I’ll never make anything from it. It’ll be there so hopefully people can discover it.”

Callaway says the album would not have come to fruition without the financial assistance and support from a few friends. Particularly, Steve Bozeman who “believed in (him) and supported (him) when no one else did in a very real and tangible way.”

In the pipeline for the artist is a solo album, “By Landlord’s Request” that has been a long time in the making and three albums of original songs.

“There’s stuff that needs to get out now,” Callaway said. “If people know that this is out and that I’m not dead, I’m simply going to do as much as I can for as long as I can. I’m going to keep shining light until I’m extinguished.”

The Mo’tet’s album can be found for purchase and to hear on Callaway’s site (jeffcallaway.net) along with limited supplies at The End of All Music in Oxford.