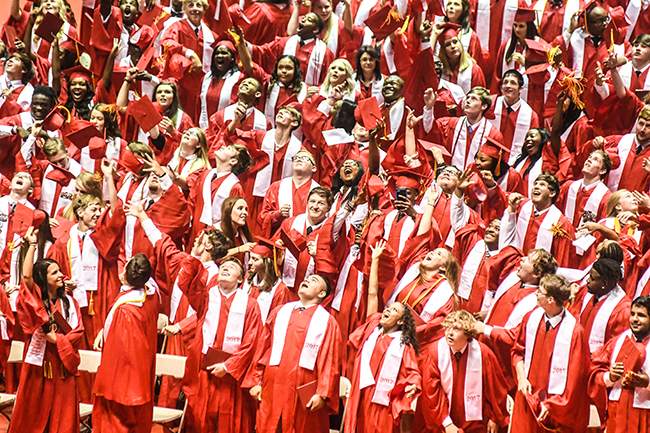 Lafayette High seniors throw their caps in the air at the conclusion of their graduation ceremony at the C.M. "Tad" Smith Coliseum, in Oxford, Miss. on Friday, May 19, 2017.

Lafayette High School graduated 186 graduates in its 2017 class during a ceremony held in the Tad Smith Coliseum Friday evening.

The arena provided relief from a balmy night as the families of the friends filed into the arena.

“To my family and guests, thank you for your love, support and wisdom you have given me,” said senior Joshua Byrd, as he spoke at the podium welcoming guests. “Without their support, I wouldn’t be where I’m at today. Thank you to my friends, whose memory I’ll carry with me.”

Salutatorian Anja Dierks gave a speech and spoke about how the moment was “sacred.”

“Tonight, fellow classmates, we can go our paths and say we made it,” Dierks continued. “We have survived the last four years of our lives.”

Dierks quoted J.K. Rowling’s “Harry Potter” series when she reminded her fellow graduates that “happiness can be found, even in the darkest of times, if one only remembers to turn on the light.”

The song “For Good” from the Broadway show “Wicked” was performed by a trio of singers that included senior choir members Kenyetta Mathis, Telihia Tyson and class valedictorian Chyna Quarles, who also spoke later in the evening.

The Commodore Award was presented to Tyler Weaver, the drum major for the school band.

During Quarles’ speech, she thanked her friends, family and teachers for their “support encouragement and impact on (her) life.”

She included a quote from C.S. Lewis in her speech which reads, “Each day we are becoming a creature of splendid glory or unthinkable horror.”

“As I hear this quote, I ask myself: what creature am I becoming?” Quarles said to the class. “Am I making choices that are leading me toward good or are my choices leading me toward evil. Every minute of every day, we are deciding who we are.”