Next Gear Solutions educates students on how software works 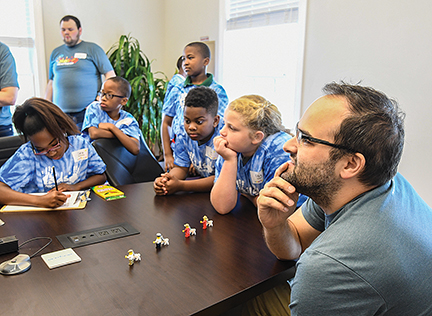 Jud Nowell, right, Infrastructure Administrator at Next Gear Solutions, works with students from West Point, in Oxford, Miss. on Tuesday, May 16, 2017.

A group of third and fourth graders visited a tech company in Oxford last week to learn more about the ins and outs of how software works.

Next Gear Solutions, a restoration software company, hosted the group from West Point. The students were invited after a former Next Gear employee, who is now the teacher for the school’s computer club, proposed the idea to the company.

“When we heard that, we immediately said we’d do it and do it well,” Beth Thompson, the Executive Coordinator at Next Gear, said. “(The children) live in the technological age. It gives them opportunities. What we’re teaching them is the life cycle of how software is developed. We’re bringing it to their level.”

The children were divided into teams and pitched problems that needed to be solved. Next Gear employees played the roles of “customers” who were experiencing tech issues.

“The understanding as far as software, can be hard to communicate to a third or fourth grader,” Thompson said. “They actually are smarter than we are in a lot of ways when it comes to technology. When you ask how many of them play on apps or games, it’s one hundred percent. We’re teaching them the back of that. That someone has programmed those games to make them work.”

Thompson added that Next Gear would like to bring back the program in the future.

“We’re excited they’re here and we’re looking at the potential of this being a program that we do to bring kids from Mississippi in and teach them more about technology,” she said. “What it is, how it’s created and how it benefits people.”