And The Echo headed to The Grove 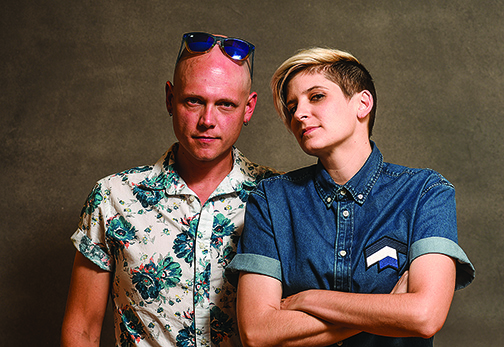 The synth-pop band And The Echo don’t sound like any other group in Oxford. And the duo, composed of Winn McElroy and singer Morgan Pennington, are well aware of that fact.

“It’s not that we try to be different,” said McElroy on the porch of Proud Larry’s seated next to his bandmate. “It’s just what we do and how we write.”

In a town that prides itself on its long line of folk, blues and country singer-songwriters, And The Echo are certainly an anomaly. McElroy aptly describes their shimmering, synth-driven pop as “Duran Duran having a baby with Depeche Mode”, and he’s not far off.

The big differing factor though is frontwoman Pennington’s emotional vocals and lyrics that lend a human touch to a genre that is widely dismissed as being artificial and hollow.

“Some people will stumble upon us, and randomly come to a show,” Pennington said. “There are people who are like, ‘where are you guys from?’ I’ll tell them around here and they say, ‘are you serious? I never knew this would come out of Oxford.’”

Since their formation in March 2014, the duo have steadily assembled a following. Currently, they have over 2,500 “likes” on their Facebook page and their hometown shows are always well-attended.

McElroy, a Clarksdale native, met Pennington (from Pascagoula) while he was producing an acoustic EP for her.

Pennington recalls that one day during those sessions, McElroy came to her with a new version of one of her songs that he had been tinkering with. Instead of acoustic music, the track was transformed into something electronic.

“(McElroy) said, ‘I did something weird, but I want you to hear it and see what you think’ and he was scared to show it to me,” Pennington remembered. “I loved it, I absolutely loved it. But I thought there was no way we could do it live.”

Soon after, came a trial by fire. Pennington was invited to perform at the Double Decker Arts Festival, and she was hesitant to accept. The singer told McElroy about the invite a week later, and he agreed that it would be difficult to replicate their sound live.

But then, an idea dawned on him.

“I thought, ‘you know what? I like her, we get along, let’s do this,’” McElroy said. “I told her to call (Double Decker) and tell them we’d do it. We ordered a ton of gear that we needed to make this happen live.”

After a successful showing at the festival, they decided to stick together and record more music, eventually putting out a self-titled EP in 2016. Their latest record, “II”, was released on Valentine’s Day.

McElroy says the band was more confident of their sound going into “II”.

“On the first record we were still trying to figure out what we sounded like,” Pennington added.

Despite their success in Oxford and on tour, the group still faces criticisms about being an electronic-based band and not being “real.”

“It is one hundred percent harder to do an electronic band than it is a band where you have four members and everybody is fielding different parts,” McElroy said. “It’s just the two of us and we’re writing everything. We go through hundreds of sounds to find the kick drum sound that we want to use, and we make them from scratch. With electronic music, you have all these elements that you’re crafting from scratch. And a guitar is going to sound like a guitar, but a synthesizer can sound like anything.”

But the band rolls with the punches and don’t let their detractors get to them.

“To some people, a Mississippi band doing electronic stuff is really strange,” McElroy said. “Getting in (to venues) is hard. But every time we play somewhere, they want us to come back.”

And The Echo will be playing in The Grove on June 11.