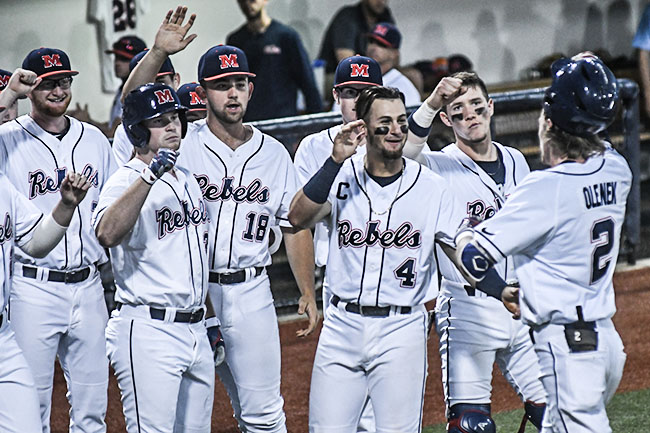 HOOVER, Ala. — It’s Ole Miss taking on Auburn in the first round of the Southeastern Conference Tournament today at Hoover Metropolitan Stadium. The result could have major implications for the Rebels, who are squarely on the bubble for the NCAA Tournament.

Ole Miss will be without shortstop Grae Kessinger, who will miss any more games the Rebels play this season after breaking his foot earlier in the day.

Check back here for Ole Miss vs. Auburn live score updates and see the updates below. First pitch is set for 4:30 p.m. on the SEC Network.

UPDATE: The tournament opener between South Carolina and Vanderbilt went 11 innings, delaying first pitch of the second game between Texas A&M and Missouri until 2:10 p.m. Auburn and Ole Miss, assuming no additional delays, will likely start after 5 p.m.

Texas A&M and Missouri are in a lightning delay in the sixth inning (4:40 p.m.).

Bottom 1st: Brady Fiegl gives up a one-out single to Daniel Robert, but nothing comes of it. The inning ends with Feigl picking off Robert trying to steal.

Top 2nd: Cooper Johnson one-hops the wall to dead center for a two-out double, and Kyle Watson, filling in for the injured Grae Kessinger, brings him home with a single to left. Ole Miss 2-0.

Bottom 2nd: A one-out single followed by errors by Tate Blackman and Colby Bortles load the bases for Auburn, but Feigl gets Blake Logan and Will Holland to hit into fielder’s choices to keep the Tigers off the board.

Top 3rd: Tate Blackman works a leadoff walk and moves to second on Golsan’s sac bunt, but he’s picked off there to end the Rebels’ half of the frame.

Bottom 3rd: A two-out walk and a wild pitch put a runner at second for Auburn, but Feigl strikes out Josh Anthony to end the Tigers’ threat.

Keegan Thompson is out after three innings. Auburn goes to right-hander Casey Mize, who’s got a 1.97 earned run average.

Top 4th: Bortles starts the inning with an infield single, but he doesn’t advance. Mize fans Tim Rowe to end the Rebels’ half of the frame.

Bottom 4th: Auburn’s third hit of the inning, a two-out RBI double from No. 9 hitter Will Holland, cuts Ole Miss’ lead in half. Ole Miss is making a pitching change. Ole Miss 2-1.

Freshman right-hander Houston Roth inherits two on with two out.

Daniel Robert lines out to Golsan in right to end the inning.

Top 5th: Mize gets two strikeouts and a groundout to retire Ole Miss in order in its half of the inning.

Top 6th: Will Golsan doubles to start the inning before Nick Fortes bunts him over, but Dylan Ingram throws the ball away, allowing Golsan to score. Fortes advances to second on the play. Tied 3-3.

A groundout, strikeout and popup leave Fortes at second.

Will Stokes comes on to pitch for Roth.

Bottom 7th: Ole Miss makes its third pitching change after Dylan Ingram’s one-out single. Closer Dallas Woolfolk coming on with one out in the seventh.

Woofolk gets a flyout and popup to send the game to the eighth.

Bottom 8th: Auburn puts two on and advances them with a sacrifice bunt before a wild pitch allows Luke Jarvis to score. Auburn 5-3.

Woofolk gets a strikeout and a flyout to keep the Tigers from adding on.

Mize retires the last two batters he faces, and Auburn eliminates Ole Miss from the SEC Tournament. The Rebels, who dropped to 32-25, will wait until Monday to see if they receive an at-large bid to the NCAA Tournament. Final: Auburn 5, Ole Miss 4

HOOVER, Ala. — Ole Miss’ players don’t need to be reminded what could be at stake for them in this year’s Southeastern Conference Tournament.

The Rebels (32-24) may be playing for their NCAA Tournament life when they get a rematch with No. 20 Auburn on Tuesday (4:30 p.m., SEC Network) in their tournament opener at Hoover Metropolitan Stadium. The Tigers (34-22) took two of three from Ole Miss over the weekend in Auburn.

“You hear it all the time,” first baseman Nick Fortes said. “It’s hard to block it out, but we know we have to win no matter what.”

How accurate that statement is won’t be known until the NCAA field is announced next Monday, but hanging around a few days in Hoover can only help boost a postseason resume that’s bubbly. Ole Miss, which was a 3 seed in regional projections put out by Baseball America and D1Baseball.com before its series loss to Auburn, is 13-20 against the RPI top 50 but finished 14-16 in SEC play during the regular season.

Ole Miss’ series-salvaging win over Auburn on Saturday bumped the Rebels to No. 32 in the latest RPI rankings, putting themselves on the fringe based on recent history. Seven SEC teams with losing league records have made the field of 64 the last five years, but all of them had an RPI inside the top 30.

A win Tuesday would move Ole Miss into the double-elimination portion of the tournament starting with a matchup with top-seeded Florida on Wednesday. A loss would send the Rebels home to sweat it out until Memorial Day.