2017 Oxford graduates are the most decorated class in school history 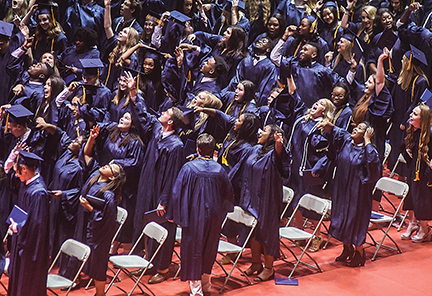 Oxford High students throw their caps in the air at the conclusion of their graduation ceremony, at the C.M. “Tad” Smith Coliseum on Friday.

A total of 270 students walked across the stage at the Tad Smith Coliseum during the Oxford High School graduation ceremony.

On Friday, the largest class in OHS history was celebrated for all their efforts over the past four years (and before high school).

Superintendent Brian Harvey gave a speech at the beginning of the night and told the graduates, “every class has a story and a place.”

He reflected on their school careers from the fall of 2004 to their recent accomplishments.

“Today, you’re leaving Oxford High as one of the most decorated classes in the history of the school,” he said. “Your class has earned over five million dollars in scholarships to various colleges and collectively you have won more championships, both academic and athletic, than any other previous class had ever dreamed. Your story is a very special one.”

“‘Life is too short to wake up with regrets. Believe everything happens for a reason. Embrace your decisions and learn from your mistakes.”

“During the next 10 years, we have the ability to dream, take risks and pursue our passions,” Chao added. “Success is not defined by salary or fame, but by one’s positive impact on society.”

Salutatorian Nitin Ankisetty’s love of numbers was injected into the opening of his speech.

“Since we started school on August 12, 2013, we’ve worked 1,383 days toward this special day here,” Ankisetty said. “Three years, nine months and four days of late night essay writing, frantically turning in assignments minutes before the due date and procrastination in general has brought us here.”

He added that he felt like “a part of the Charger family now more than ever before.”

Ankisetty concluded by telling the students to thank someone who made the graduation possible.

“Find one to two people in your life that have had a huge impact,” he said. “This can be your parents, your friends, a special teacher or really anybody. Take time over the next few days to really thank them. Explain the role they played in your life, how they positively impacted you and what they mean to you.”