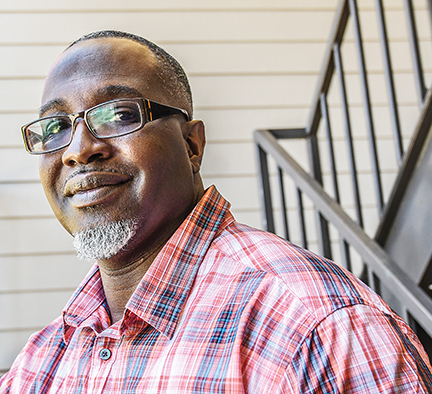 Bruce Newman Robert Ivy is a 2013 kidney transplant recipient and the Oxford native wants others to be aware of the potentially deadly disease, as well as the need for donors.

In 1999, lifelong Oxonian Robert Ivy was diagnosed with a disease he didn’t see coming.

Ivy’s doctor told him that he had come down with Kidney Disease. For Ivy, it was a surprise as he wasn’t feeling any different than normal, but it didn’t come as a total shock. His mother had also been diagnosed with the sometimes hereditary illness and was on dialysis for 35 years.

Miraculously, Ivy didn’t go on dialysis between his diagnosis in ’99 and his eventual kidney transplant in 2013. Now, he’s making it his mission to spread awareness.

“With kidney disease, oftentimes it’s called a ‘Silent Killer’ or the ‘Silent Disease,’” Ivy, 45, said. “You can go a long time not knowing that you have it. The side effects are nothing. It’s very important for me to get the word out there and just let everyone know how important it is to get a check-up.”

After being on a transplant list, in May 2013, Ivy got the call from his doctor in Jackson that they had found him a donor, but it turned out to be a false match. Two months later, he got the message he was waiting to hear: “we have a kidney for you.”

“God was good to me and He doesn’t want me to sit around, do nothing and not tell anybody else,” Ivy said. “It was a blessing and a miracle at the same time.”

According to the National Kidney Foundation, Chronic Kidney Disease affects an estimated 26 million Americans. African-Americans are three times more likely to come down with the illness. In the state of Mississippi, there are three facilities that are able to do transplants: the University of Mississippi Medical Center in Jackson and at the UMMCs in Grenada and Biloxi.

Dean Henderson, the Administrator of Transplant Services at the Medical Center, says that UMMC completed 146 transplants in 2016. This places the center in the top quartile of centers in the country.

Henderson recommends that adults go to their annual check-up every year even if they’re “feeling fine.”

“This is important for many reasons, but kidney disease may be one of the more insidious diseases that can be caught early by attending physician visits,” he said. “People with these diseases or relatives with kidney diseases should be diligent to identify their risk and contact their doctor for routine screenings.”

Since his transplant, Ivy and his wife organized a kidney walk in 2016 and this year to raise money for research and the dialysis unit. With their most recent walk, they were able to donate $1800.

Currently, Ivy is seeking out a mentor that can help him with public and motivational speaking. His goal is to bring his story into schools, workplaces and anywhere that will have him.

“I have to reach my hand out and help somebody,” he said. “Every day you have people on dialysis and people dying from kidney disease. You can sign up and check to see if you’re a donor. I’m just trying to do my part. I can’t be a donor, but I can help in some other way. I can help with encouraging words or just give them a helping hand.”

Ivy still thinks about his kidney donor, a 13-year-old boy who was accidentally shot, and wonder what his purpose was after the transplant.

“You don’t ask questions about the Lord’s work, but as I sit around and think that this little boy died and God gave me his kidney to live,” Ivy said. “I think, what’s my purpose now? What do I need to do? He didn’t give me his kidney just to sit back. I have to do something. It used to bother me when I’d think about it, but the Lord knows what He’s doing.”

And Ivy has found the silver lining in his situation.

“If I went to the doctor and he told me my kidney was fine,” Ivy says, “I wouldn’t have been helping other people.”

Those interested in donating to or being involved with the kidney walks can reach out to Ivy at robertivy17@gmail.com. Individuals can sign up to be an organ donor at donatelifems.org.