Oxford baseball to use summer to regroup, prepare for jump to Class 6A 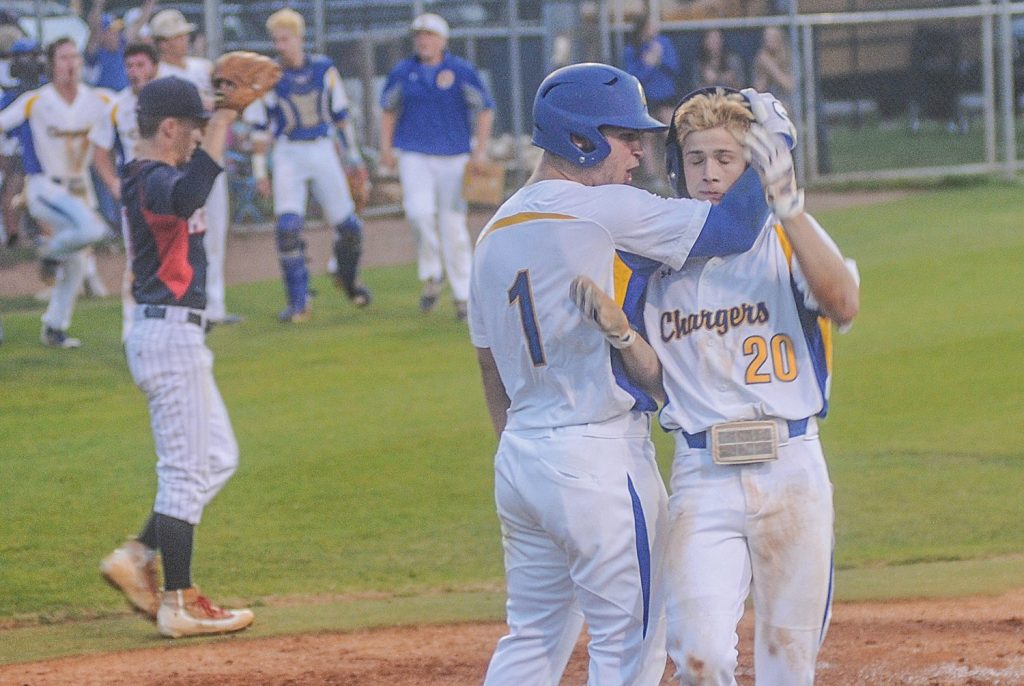 Oxford High's Drew Bianco (1) congratulates congratulates his brother Sam Bianco (20), who scores on a double by Carson Stinett, against Lewisburg in the MHSAA Class 5A playoffs at Edwin Moak Field in Oxford, Miss. on Monday, May 8, 2017.

A week ago, a potential dynasty run was halted. The Oxford High baseball team’s bid for a third consecutive state championship was thwarted by the upstart Pearl River Central Blue Devils at Trustmark Park in Pearl.

As the sun set, so did the latest chapter of the Chargers’ baseball program that saw them dominate Class 5A for the past three seasons. Now Oxford must turn its attention to a new set of opponents and challenges with the jump to Class 6A beginning in August.

In order to prepare for next season, Oxford head coach Chris Baughman is going to try something a little different during the summer season that he has not employed during the Chargers’ recent run.

“It sounds crazy, but we’re going to play our upcoming ninth- and 10th-graders,” Baughman said. “Anybody that wants to play with us can, but I’m going to give (the upperclassmen) the opportunity to play somewhere else if they want to. Get away from me if they want to and then come back in the fall and try to earn a spot. … It’s the next chapter.”

Oxford is losing seven seniors, five of them everyday starters. The infield is losing first baseman Ben Bianco and third baseman Carson Stinnett. Stinnett was also in the starting rotation on the mound along with fellow senior Reed Markle, who was moved to the bullpen during the season. Center fielder Preston Perkins will no longer be shagging fly balls, and the Chargers will also be in need of a new designated hitter with Duncan Graeber graduating.

With a lot of production leaving the roster for next season, Baughman is getting a jump start on filling out his team and getting the younger players experience during summer as apposed to a trial-by-fire experience that freshman second baseman Sam Bianco had this season.

“When I took the job seven years ago, I didn’t want to be a good baseball team. I wanted us to be a good baseball program,” Baughman said. “I think we’ve done that. I’ve made many mistakes along the way, but we’ve got kids in the school district, kids on this team that don’t want to rest on their laurels of the team before. That was the big thing with this group. They want their own identity.”

What is returning is a catcher that was not planning to become the everyday catcher in sophomore Clay Ivy. After it was apparent Ben Bianco’s shoulder injury from a season ago was going to hinder his ability to perform his duties behind home plate, Baughman had to make a move and Ivy proved he was up to the task. Another sophomore that made big strides was pitcher Bo Gatlin. Gatlin logged key innings during the regular season and, while he did not have but one appearance in the postseason, showed the big stage did not affect him.

“(Ivy) by far is the unsung hero of the whole bunch,” Baughman said. “Nobody is going to say anything about him. Nobody is going to point him out. He doesn’t show up in the stat box hitting because he gets DH’d for all year. But to come out and do what he did every single game, controlling the running game. Keeping as many balls as he could from the net. Not giving up free bases. Doing it as a sophomore? He’s got a big future ahead of him.”

The Chargers begin their summer schedule this week.