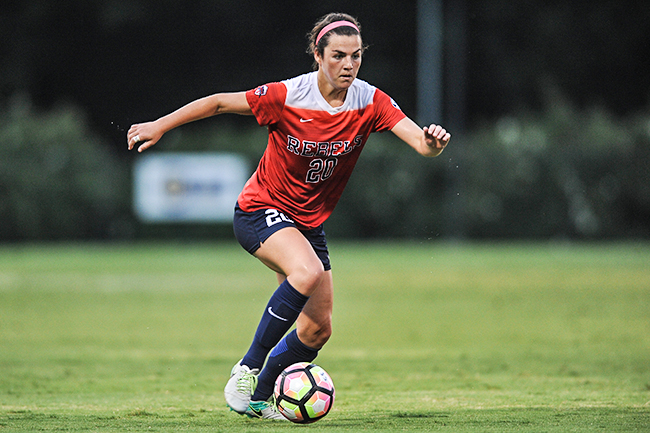 “We are very excited for the fall and can’t wait to get started this August,” Mott said. “We feel like a tough non-conference slate will again prepare us for battle in the SEC, and we look forward to the challenges it will bring us. With a strong core of players returning, and a very solid group of transfers and freshmen, we are looking forward to what this upcoming season brings us.”

The Rebels will face eight NCAA Tournament teams from a year ago, including Elite 8 participants Auburn and South Carolina, as well as Florida (Sweet 16), Texas A&M and Arkansas. Ole Miss will also take on three non-conference teams who played in the 2016 postseason, including Alabama State, Michigan and Memphis.

Following an exhibition match at South Alabama on Aug. 11, the Rebels will open a busy three-week stretch at home, with the home opener vs. Alabama State on Aug. 18. The following Sunday, Northwestern State pays a visit to the Ole Miss Soccer Stadium, before Big 10 foe Michigan makes the return trip to Oxford on Aug. 25.

After the first road match at Louisiana-Lafayette on Aug. 27, the Rebels return home the first weekend in September to host High Point (Sept. 1) and Southern Miss (Sept. 3), before a long stretch of road contests get underway the following weekend.

A weekend tournament in Memphis Sept. 8-10 will bring a pair of non-conference matchups vs. Tulsa (Sept. 8) and Memphis (Sept. 10). A week following, the Rebels head to The Sunshine State to open SEC action at Florida (Sept. 14), before closing the non-conference slate at Stetson (Sept. 17).

The SEC Soccer Championship is set for Oct. 30 – Nov. 5 in Orange Beach, Alabama.

A full TV schedule will be released at a later date to include game times and other TV designations. All home games will be available on SEC Network + via WatchESPN and the ESPN app.