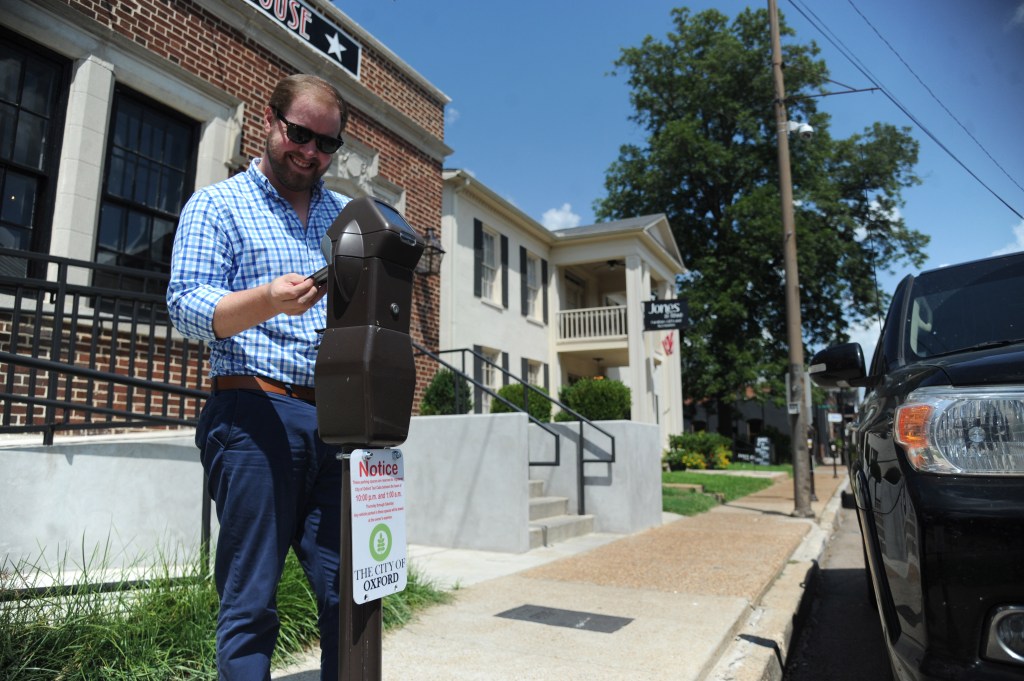 Blake Belcher pays for parking in an area that is reserved for taxis from 10 p.m. to 1 a.m. on Thursdays thru Saturdays, on Wednesday, August 3, 2017. The Oxford Board of Aldermen voted on Tuesday evening to get rid of the reserved spots for taxis on Jackson Avenue and Van Buren Avenue.

At the request of the Oxford Police Department, the Oxford Board of Aldermen voted Tuesday to do away with the reserved parking spaces for taxicabs on East Jackson and Van Buren avenues.

Last summer, the board approved allowing OPD to reserve nine parking spaces for taxis only from 10 p.m. to midnight Thursday through Saturday.

“We had several complaints so we started reviewing the parking for the taxis, but we were finding they just weren’t using the spots,” East said. “Many are electing to park in metered spots instead.”

Complaints came from visitors and residents who parked in the spots and then found themselves with a $125 towing fee after their vehicle was towed away. While signs were placed on the sidewalks and on the parking meters, some claimed the signs were too small and that it was too dark to see the notice on the meters.

“We were penalizing our residents and the cab companies aren’t even parking there,” East said.

“They just aren’t using them,” he said. “And we’re losing two hours of paid parking there.”

Alderman and mayor-elect Robyn Tannehill asked if they had spoken to the cab owners about the change to see how if they objected to having the spaces removed.

“Did you get any push-back on this?” she asked.

Sossaman said only one cab owner said he had an issue with the spots being taken away; however, no one spoke up about the change when Mayor Pat Patterson asked if there was anyone in the audience who wished to comment.