John and Lauren Stokes own Tarasque, an Oxford restaurant that specializes in Mediterranean-style cuisine, such as spaghetti with chicken parmesan, papaprdelle bolognese, puttanesca with shrimp and linguini and shrimp in a cream sauce. (Photos/Tarasque)

French folklore tells of a beast called the Tarasque, which was tamed by Saint Martha, the patron saint of cooks. The legend says that she used her charm to subdue the creature.

While the Mediterranean restaurant in Oxford named after the fearsome creature might not tangle with dragons, their charm (and hearty food to match) has been winning over customers since their doors opened a year and a half ago.

Tarasque (14 County Road 307) is run by John and Lauren Stokes whose long history in the restaurant industry culminated in starting their own business. John, 37, an Oxford native, has been cooking since he was 14 while his wife, Lauren, 34, was selling grilled cheese at a homemade stand at 10 years old. 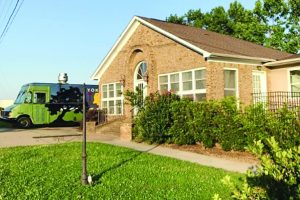 Tarasque shares a kitchen in this building with other local food companies. (Photo/Tarasque)

In their restaurant, John runs the kitchen while Lauren takes care of the front of house duties. The couple, who have been married for seven years (and together for 14), started out working together with small catering gigs.

“It’s never been weird for us to work with each other,” Lauren said. “We just really love each other and respect each other. With catering, we got to see how we work together. Every time, we’d do it, it was so fun and would reaffirm that we have to do this.”

Their business shares a kitchen with other local food companies like Fergndan’s Wood Fired Pizza and the YoknapaTaco Truck. Jake Sessums, who owns the latter, is also business partners with the Stokes couple. Due to a shared space, Tarasque is only open Thursdays through Sundays. During the rest of the week, Lauren works at BorgWarner in Water Valley and John works on Tarasque while also doing consulting work.

“And she’s the hardest working lady I know,” John added.

The restaurant is situated in an old home and the couple is quick to welcome anyone who walks through its doors with a genuine graciousness. Currently, Tarasque is available for pick-up or delivery through Landsharkdelivery.com. There are, however, wooden benches in the space for guests who can’t wait till they get home to chow down.

Lauren, who answers the calls for food orders, has a seemingly endless supply of cordiality that never wanes even with the most difficult of customers.

“We choose to work and interact with people daily,” Lauren explained. “Why would I want to give them less than a stellar experience? We’ve always wanted to do this and people are ordering our food. People are ordering it to feed to their kids. If you think about it, that’s crazy. That’s so powerful that of all the food in Oxford, they’re choosing to spend their money with us.”

Through working with the Stokes, Sessums said that they have become “two of (his) favorite people in the world.”

“Over the last two years John has given me more insight and knowledge about food service than I learned over the prior 15 years of experience, while Lauren has never ceased to brighten even the darkest day with her loving spirit and personality,” Sessums said. “I don’t know where I would be today without either of them.  Probably no longer running the food truck and definitely without as much joy in my life.”

John says most people who dine with Tarasque, or try it for the first time, tend to come back. Perhaps it’s because of his simple French and Italian-inspired approach to cooking.

“If you look at the way we do stuff, my grandma would always fry stuff in olive oil,” John says of growing up around the kitchen. “She would never use butter or lard. It’s all about letting the ingredients sing; you just let it be. That’s what we strive for.” 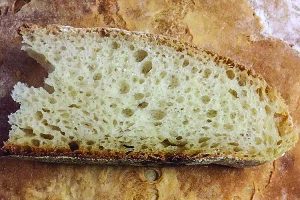 The couple’s symbiosis has resulted in an efficient business filled “with love and respect.”

“(John is) in charge of really the whole restaurant, but especially the kitchen,” Lauren said. “He knows that if I make a decision for the front of the house, he’s completely behind it. We just want to make people happy and we want to feed them. If we didn’t have to charge people, we wouldn’t.”

John and Lauren dream of one day running Tarasque full-time.

“It’ll get to a point where we can only do the restaurant and focus on it,” John said. “We’re working toward that point someday. Tarasque will always be in Oxford.”