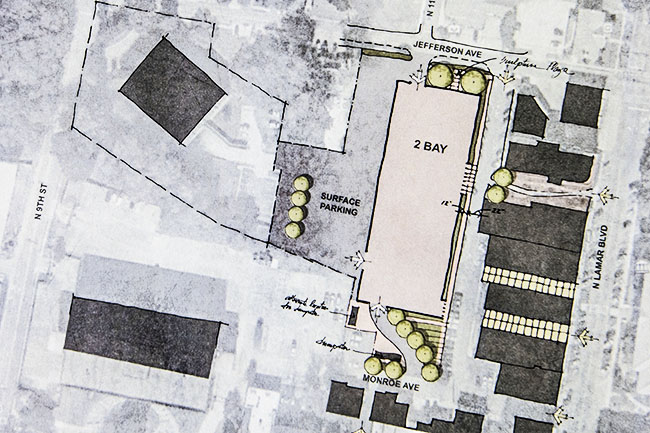 The recommended design of the parking garage will be four levels, 330 feet long and contain 481 spaces within the structure.

The Downtown Parking Advisory Commission has decided on the design that they like best for the new parking garage to be built on the Square.

While nothing has been finalized, the Commission unanimously recommended a design by Eley Guild Hardy Architects that will be four levels high, 330 feet long, contain a total of 481 spaces within the structure and 113 available spaces surrounding it.

The design will be presented to an executive committee on June 27.

“Between June 27 and July 7, there will be some decisions we’ll have to present budget-wise,” Casey Rogers, with the Parking Commission, said. “(This option) is the truly the most economic.”

The garage will be placed in the current lot between Monroe Avenue and Jefferson Avenue, just west of North Lamar Boulevard. A potential access road from North Ninth Street could also be in the works with this option.

An issue that arose during the commission’s discussion was the presence of a dumpster that restaurants will be utilizing near the garage.

With the proposed option, the dumpster would lie near one of the garage entrances.

“We don’t want people to have to walk past a dumpster every time they use the garage,” Kevin Frye, who also serves on the commission, said of the situation. “I think having a second dumpster is a good idea.”

Architect Jim Eley spoke about pulling back one of the curbs on Jefferson Avenue to allow trucks and larger vehicles to enter the lot.

“If this is going to be a parking lot,” Eley said, indicating the empty spaces around the garage, “they’re going to need a way to get in.”