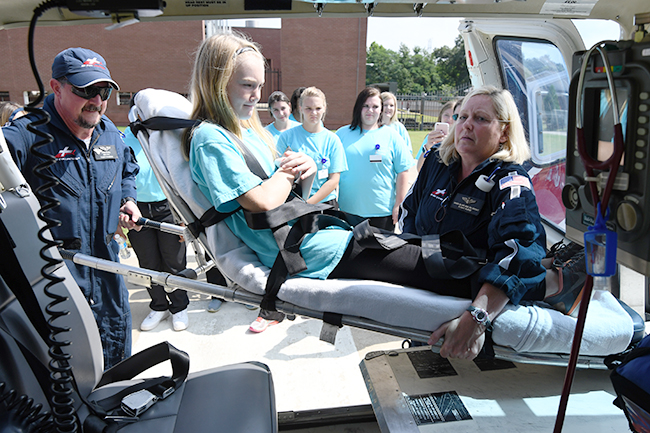 Chris Powell, left, and Shari Blair, right, load Olivia Miller onto a medical helicopter during a demonstration at a nursing camp at Baptist memorial Hospital-North Mississippi, in Oxford, Miss. on Friday, June 16, 2017.

A lot of training is required to become a nurse, doctor or any position in the medical, but some local students in the area are already getting a jumpstart on their education.

The Baptist Memorial Hospital- North Mississippi offered a “CRASH Course” for 18 high school students (from Oxford and beyond) this past week that taught them nursing basics including giving injections, working in an ambulance and even how helicopters are used to transport patients.

Jenny Filgo, the Director of Education at the hospital, says the program began 10 years ago when she was stationed at New Albany. A variety of students have passed through the program from middle schoolers to seniors in high school.

“They get to shadow nurses, they talk to physicians, they get to go through all of our nursing areas and see radiology, surgery, the ambulance and the ER,” Filgo said. “We let them talk to all the real folks that work here.”

What started out as the Healthcare Career Academy has become the CRASH Course because, as Filgo says, it features “a little bit of everything.”

The program isn’t just fun for the students, Filgo says the nurses who help teach all love the camp, too.