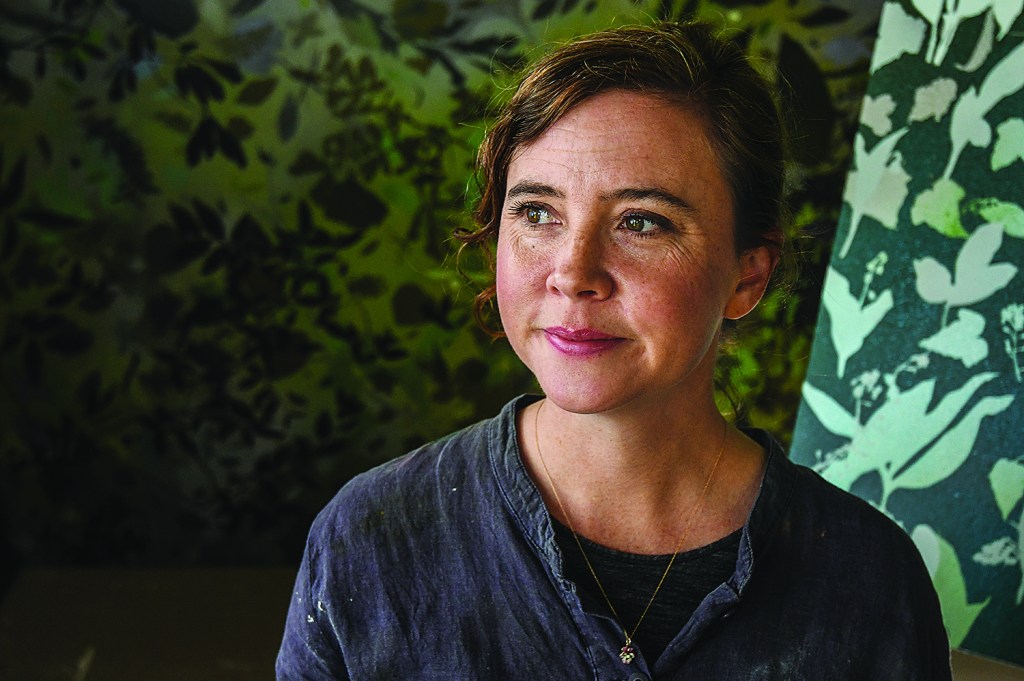 Artist Carlyle Wolfe in her studio near Oxford. The Ole Miss graduate uses the landscapes of Mississippi as an integral part of her creations. (Photo/Bruce Newman)

As each season passes, and leaves fall from the trees and bloom again during spring, artist Carlyle Wolfe is there to witness it all firsthand.

Wolfe’s art studio and home on Highway 30 has a direct link to the main subject of her work: nature. From her studio window, she can see the flora around her rural Oxford home. Many of Wolfe’s meticulous paintings and installations reflect these seasonal changes and emulate the beauty in her surroundings.

One of her most recent installations, “Fall,” was given a Delta Award during the 59th Annual Delta Exhibition at the Arkansas Art Center. The work features over 200 stainless steel shapes of fall leaves that Wolfe drew from samples around her home over the course of 15 years. The “leaves” dangle in vertical columns (the piece is 144”x198”), highlighting the variety and sheer number of the plants.

Before “Fall,” Wolfe, 39, had been hand tracing and cutting the plant shapes for a decade.

“I realized that if I wanted to use my hands longer, it would be more efficient to use a different strategy,” Wolfe said in her studio. “So I started making vector drawings of these and now I can cut them out. I have two plotter cutters. One that does smaller shapes and one that does bigger ones.”

Wolfe describes “Fall” as “cumulative and ongoing” because, “the landscape is very specific and precise, but also there are so much movement and fluidity.”

Wolfe, an Ole Miss graduate, can’t recall exactly when she wanted to be an artist, but she does remember her second-grade year piquing her interest in the subject. After earning a diploma from Ole Miss, the artist went to LSU for graduate school. She eventually found her way back to Oxford and found a studio space above a law office on the Square.

She describes her current home and studio as “perfect.”

“I just saw it and I knew it was a fit,” Wolfe remembered. “I didn’t look at another place. I’ve loved living out here, it’s just been kind of easy access to anything I want to do. But you don’t have to deal with traffic.”

Her two friendly dogs have plenty of space to roam, as well. Wolfe also rides a four-year-old horse stabled just up the road.  The artist’s studio, which used to belong to potters, is only a few steps away from her main home.

Wolfe says she was encouraged to apply to the Delta Exhibition after she saw Betsy Bradley, the director of the Mississippi Museum of Art in Jackson, was a juror for the competition.

During the exhibition, Bradley had high praise for “Fall.”

“These leaves and petals dance, they sparkle and they shimmer with a material more often associated with the earth and permanence than with the transitory lives of leaves or blossoms of a shrub,” Bradley said. “This environment created by Wolfe takes the ordinary and makes it splendid, takes fragility and gives it strength, and takes the hidden and makes it large and triumphant.” 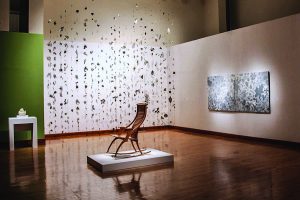 The landscapes of Mississippi are an integral part of Wolfe’s work and she considers herself part of the “long tradition” of artists who were influenced by the Magnolia State’s natural beauty.

“Something that I’m after is this sense of rhythm and pattern,” Wolfe said. “I don’t know if it’s the humidity, but there’s a buzz about it. I don’t think my work is something distant in this vista…I don’t think my work makes people wish they were somewhere else. It’s really immersed in something accessible.”

She also credits the Mississippi Arts Commission for their support over the years and for the fellowships and grants they have provided. A few weeks ago, the Mississippi Institute of Arts and Letters awarded Wolfe the Visual Arts award for “Fall.” 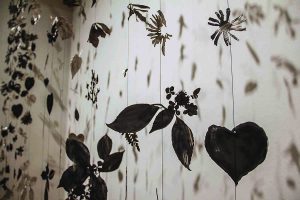 Wolfe’s creation, “Fall,” was given a Delta Award by the Arkansas Art Center. (Photo/Bruce Newman)

Despite her success in the region, from time to time, Wolfe has considered living for a few months a year in New York City. But there are many perks, she says, about creating art in a smaller town. Though she lives a little more rurally, she doesn’t feel alone.

“We have, in Oxford, regular programs and events where you can be sitting in a room with a group of people interested in hearing a lecture and participating in a discussion about ideas and art,” she said. “I think artists support each other, it’s not hyper-competitive. You’re not totally isolated.”

Wolfe’s work is available for purchase out of her studio, at Southside Gallery in Oxford and the David Lusk Gallery in Memphis. More of her art can be found on her website at carlylewolfe.com.