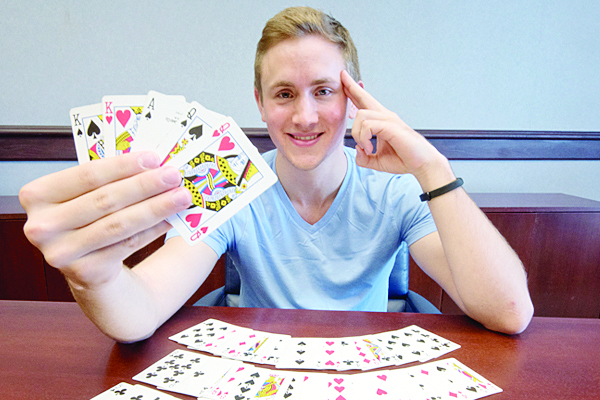 Most people can’t remember what they had for breakfast never mind the order of 52 playing cards in a row. But Alex Mullen can.

Mullen, who was raised in Oxford, graduated from Oxford High School and currently attends medical school in Jackson, recently won a new game show on FOX called “SuperHuman” (Mondays at 9 p.m. ET) which pits people with unique talents against each other. Mullen came away with the $50,000 prize awarded on each episode.

A “grandmaster of memory,” Mullen won the World Memory Championships in 2015, being the first American to do so since the competition began in 1991.

Funny enough, Mullen says his natural memory “is not really better than average.” He started pursuing memory techniques while he was a sophomore in college at Johns Hopkins University.

“Before that, I didn’t know anything about memory techniques,” Mullen said. “I read about it in a book called ‘Moonwalking with Einstein’ and at the time, I was finding that my own memory wasn’t that good, so that piqued my interest and I started reading about it and practicing the techniques that it described. I just kept getting better and better and eventually started to compete.”

The main technique that Mullen uses to memorize sequences (including cards, numbers, names and faces and historic dates) is the “memory palace.”

“The basic idea of the memory palace is that you imagine some kind of location so it could be your house or apartment,” Mullen explained. “You choose a path or route through that place and you take the information you want to remember and imagine it has some sort of visual thing and you place those images throughout that route along your palace. That route through this place that I’m familiar with maintains the order of what I’m trying to memorize. I can memorize a deck of cards by following that same path through my house.”

Mullen says that these memory skills have been “helpful” during his time in medical school.

While he was on “SuperHuman,” Mullen says that it was sometimes difficult to maintain focus under the lights and with the audience watching.

“The memory competitions are usually in a big hall filled with guests,” he said. “A lot of the competitions don’t have any spectators. There aren’t many lights or cameras. It’s very quiet so it’s a very different atmosphere. It’s like taking the SATs.”

When asked how he was able to hone in on the task at hand in front of the cameras, Mullen responded, “by the grace of God.”