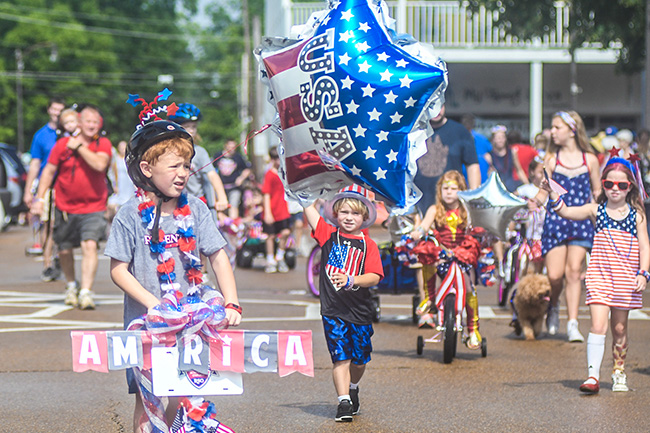 Sam Wilson’s visit to his grandparents’ home in Oxford for the Fourth of July was made a little more memorable this year by being the first to cross the finish line during the annual Family Fun Run.

Wilson, 9, from California, is in town this weekend with his family. His cousins, Pearson, 5, and Nila Vae Cochet, 7, also ran in the race. Nila Vae finished the race right behind Wilson and was the first girl to cross the finish line, which she said was her favorite part of the race.

Sam said it was his first race.

“I run when I play with my friends, and when I play football,” he said. “I haven’t really done any races like this though.”

Prior to the Fun Run, about 250 people took part in the annual Stars and Stripes on the Square 5K Run.

Organizer Gail Brown said this year’s event was the largest she can remember.

“We had more runners than ever before, more kids in the Fun Run and even more dogs running in the race (with their owners) than ever before,” she said. “It’s been the best turnout in at least 10 years.”

Volunteers served fruit, pizza and water to the participants after the races.

The race kicked off a full day of Fourth of July events despite a rain shower or two intermittently throughout the day.

After a short pause waiting for a rain cloud to move away, the annual Fourth of July Kid’s Parade started about 20 minutes late, but the crowd didn’t seem to mind as dozens and dozens of children rode patriotic-themed decorated bikes and scooters while their parents walked beside them.

The short, but festive parade, started near City Hall, went down East Jackson Avenue, up Van Buren Avenue and ended back at the Square.

Once the sun finally set, fireworks illuminated the night sky in sync with patriotic tunes. Hundreds of people gathered on the outskirts of Swayze Field for the event, some drove a great distance.

Paula Babbs, of Birmingham, has spent the past few Independence Days in Oxford.

“This is my fifth Fourth of July here,” Babbs said. “The fireworks are always exciting.”

Due to a power outage, Oxford University Stadium was closed this year as compared to past years when people could sit inside to view the spectacle.

“I like that the stadium was closed this year,” said Ole Miss graduate student Vanessa Moynahan. “Sitting in the grass with friends and the community reminded me of the local firework shows I watched as a kid with my family.”

For another grad student, Yash Bhambhani, it was his first Fourth of July in the country, though he has been here since 2013.

“The best part of watching the fireworks was listening to everyone’s ‘oohs’ and ‘aahs’ in unison,” Bhambani said. “It almost felt like everything else — worries, concerns, issues in the country — faded away and there was only this moment where the sky was lit up in beautiful, different colors and we were surrounded by a multitude of Oxonians who came together to celebrate this great country.”