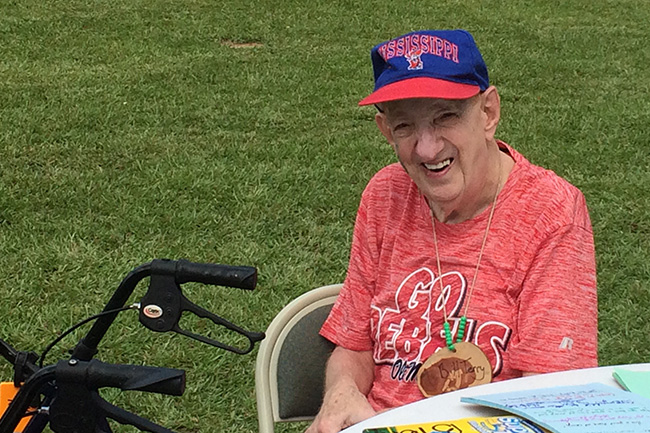 Bill Terry has attended camp at Camp Lake Stephen’s for 50 years. A celebration for him was held this week as part of the annual Camp Rainbow event. (Photo/Andy Belt)

Once a week, Bill Terry makes a call to a place that’s near and dear to his heart.

That place is Camp Rainbow. And for 50 years now, Terry has been attending the week-long program held for adults with mental disabilities at Camp Lake Stephens in Oxford.

Darrell Whitaker, the Executive Director of Camp Lake Stephens, spent his first summer there as a counselor in 1983. He fondly remembers Terry as being “really involved and really vocal.”

“Everybody knew Bill,” Whitaker remembered as he drove through the campgrounds to attend a party in Terry’s honor. “We have a talent show the last night and all the campers have an opportunity to do it. Bill always had to go last, it was his thing. Every year he would come and it would be a surprise. He didn’t want anyone to know.”

Those talent show performances ranged from Terry donning a red, white and blue costume while spinning a rifle to impersonating Elvis, much to the delight of everyone in attendance.

Camp Lake Stephens, one of the oldest summer camps in the state, was founded in 1946 by the United Methodist Minister Dr. J.E. Stephens. Whitaker estimates that Camp Rainbow was founded 15 to 20 years after.

According to their official website, Camp Lake Stephens is “committed to being a place where children, youth, and adults can encounter God and respond in faith to God’s call to transform the world.”

Currently, Whitaker’s wife, Paula, is in charge of Camp Rainbow.

The whole camp turned out for Terry’s party, which was held in an open field filled with live music, flying frisbees and jovial partygoers. Terry sat at a table surrounded by friends who signed his guestbook with well-wishes and multiple congratulations.

Terry, a Kosciusko native, was in good spirits and grinned through the whole celebration. In the past, when he wasn’t at camp, Terry spent time as a greeter at Wal-Mart in his hometown. He exuded that infectious, welcoming personality to all who meet him.

“I’ve been here a long time,” Terry said with a wide smile.

When asked what he thought of the big party going on around him, Terry said, “I love it.”

While Terry’s case of attending the camp for 50 straight years is unique, many campers come back for years in a row and even decades.

“We have a lot that have been coming to camp for 20 to 30 years,” Whitaker said. “Their parents say they come home from camp and they basically start packing for the next year. There’s not a lot of opportunities for them, so it’s their one thing to look forward to every year.”