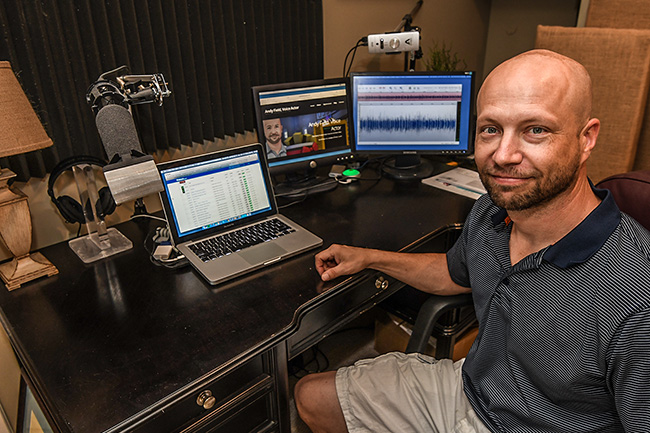 Local voice-over artist Andy Field works on projects in his Oxford home. Field gave up his career as a teacher to pursue this new venture. (Photo/Bruce Newman)

Andy Field is nearly done constructing a small room in his home that could change the course of his life.

Three years ago, Field, 45, discovered that he had a talent that was easily marketable as a “side hustle” from his former day job teaching middle school.

“One day I was in the kitchen imitating the Vaught-Hemingway (Stadium) announcer,” Field remembered. “And my wife said, ‘you should be an announcer.’ I said, ‘I’ve always kind of liked that and I’ve always liked public speaking.’ I went to Google and, sure enough, with today’s technology if you have the right equipment and a booth like that, you can start from home.”

And that’s exactly what Field did. Beginning with recording his voice in a walk-in closet, he found small recording gigs online as a voice-over artist. This past May, he turned off the lights in his classroom for the final time to fully pursue his new career. Now, the room he’s building in his home will be a dedicated voice over studio.

“I was pretty emotional on my last day of school,” Field said. “I didn’t come straight home, I just kind of drove around. I thought, what have I done? I know it’s the right thing.”

Field had tried to balance his teaching with voice-over work, but the strain eventually became too much as the amount of VO jobs increased.

“I was getting up at 4 a.m. to do stuff with a Swedish client,” he said. “For about an hour and a half during the middle of the day, I had a little sound booth in my classroom. I could record auditions or do work for a client. Then after having a bad schedule for two years at school, I really couldn’t get anything done.”

Field’s natural speaking voice is distinctly southern, but he is able to change it according to the given job. His warm-up routine before stepping in front of the mic consists of tongue twisters, singing scales and sometimes doing “cheaper auditions to get ready for the more expensive ones.”

Though he has worked nationally and internationally, Field is looking to also focus his new venture on local clients. Field is a big proponent of e-learning (i.e. learning through video instruction), a business which he says is becoming a $3.5 billion industry.

“Most businesses will have online videos basically just saying, ‘here’s our business, check us out,’” Field said. “And those are always better with voice over. Adding a product video on your landing page can increase your conversion by 80 percent.”

In terms of local businesses, Field wants to work with them to produce “corporate narrations, real estate videos and phone messaging systems.”

“There’s a lot of work everywhere for voice over artists, but a lot of businesses don’t even realize that they need it,” Field added. “They’ll say, ‘I’ve recorded my own phone message for years now and it’s worked out just fine.’ Maybe it has, and maybe it hasn’t. Video is really where it’s at. If you can cultivate the talent, the potential for business is through the roof.”

Rural people will have fewer choices