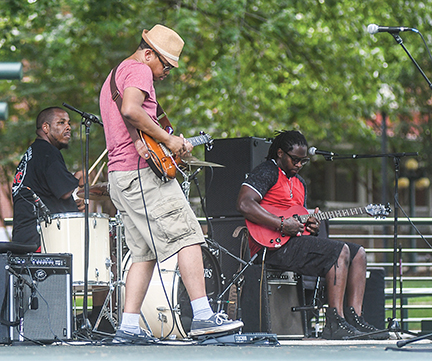 Timothy Scruggs, from left, Danian Pearson, and Cam Kimbrough play at the 8th annual Oxford Blues Festival, in the Grove on Saturday.

The eighth annual Oxford Blues Fest got off to a rocking start on Friday evening at Tallahatchie Gourmet on the Square.

The restaurant was packed as two artists took the stage to open the weekend long event.

Native Mississippian Ben Wiley Payton took the stage first to deliver acoustic traditional blues. Following him, “The Great” Effie Burt (with her four piece band) enveloped the room with her soulful voice as she did classic staples like “Going to Kansas City” and “I Can’t Stand The Rain.”

Parker says that the concept for OBF started because he “loves festivals” and before it was established, “there wasn’t much happening in the summer in Oxford.”

“It’s gotten busier,” he said. “Seven years ago it was slower. I thought if we put in the summer in July when there wasn’t anything going on, it could be something that we could grow. I didn’t want to piggyback off football season. I wanted to put it during the slowest time of the year with the idea that people could come back, stay in hotels, shop on the Square and enjoy our great town at a time that’s slow. It was to be an economic boost, but also kind of grow something organically.”

When asked what he was looking forward to most about the weekend, Parker said, “eating a lot of great food.”

That sentiment was echoed by festivalgoer Richard Swinney.

“I think it’s good so far,” Swinney said as Payton was finishing up his acoustic set onstage. “Good crowd, good music and a nice atmosphere. The Tallahatchie Gourmet food was great.”

“I’m not the biggest blues person,” Swinney admitted. “But cold beer, southern diet, and I’ll be there.”

A Gospel Brunch will be featured today at Mesquite Chop House from 11 a.m. to 1 p.m. with live music from A Family Affair Gospel singers. Admission is free, but attendees are encouraged to purchase food and drinks from the Mesquite menu while enjoying the music.