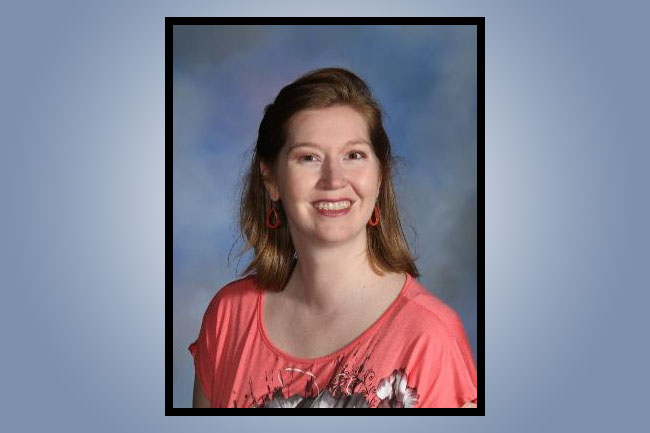 Lynndy Hurdle (above), the librarian at Oxford High School, was awarded Employee of the Year on Monday evening by Superintendent Brian Harvey.

The Oxford School District named its Employee of the Year during their monthly board meeting.

Lynndy Hurdle, the librarian at Oxford High School, was given the award on Monday evening by Superintendent Brian Harvey.

Hurdle, a graduate of Oxford High herself, has a long history tied to the OSD. Harvey pointed out that her mother, Beth Fitts, was a teacher with the district and served as the communications officer. Harvey said her father, Dee Dee, “attended every sporting event and was an active member of the community … supporting not only children and school, but away from school.”

Hurdle’s husband, Steve Hurdle, is the principal at Oxford Intermediate and her sister, Marni Herrington, is the new principal of Della Davidson Elementary.

Hurdle has been with the OSD since 2004 and according to Harvey, “she is well deserving and she took the lead role in creating and helping (Oxford Learning Center principal) Ms. Kathy Howington create the library at Oxford Learning Center. She’s a tremendous employee.”

“Ms. Hurdle has made the library come alive at OHS,” one anonymous commenter said. “She demonstrates a love for reading and invites students as well as teachers to use the library. She is energetic, creative and enthusiastic about her job. She is one of the most dedicated educators that I’ve seen. She tirelessly helps each child and adult who walks through the doors of the library.”

“I have never worked with someone that genuinely loves her students more than Ms. Hurdle,” Roberson wrote. “She is always giving herself and never asking for anything in return. She exemplifies our school vision of ‘love your people’ more than anyone I know.”

Hurdle previously won Employee of the Week earlier in the school year. She was nominated for this award against all the other employees who had won throughout the different weeks.

“I want to say thank you to the district,” Hurdle said as she accepted the award and made a quick joke toward the end of her speech. “Steve and I have a sixth grader, so probably in about 18 to 20 years, she’s probably going to want a job, too.”