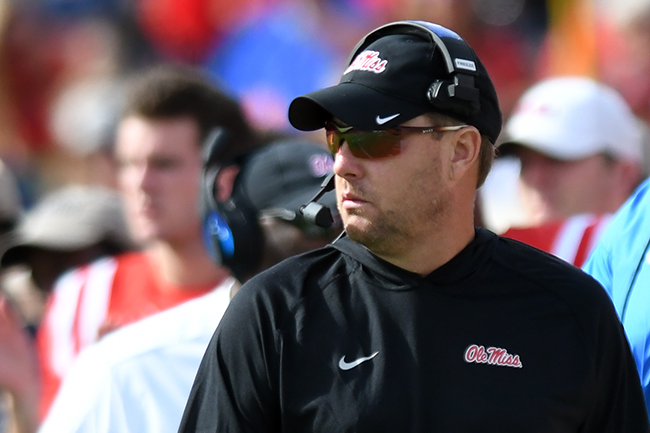 In an abrupt move, Ole Miss coach Hugh Freeze resigned effective immediately Thursday for what athletic director Ross Bjork described as a “concerning pattern” involving the use of a university-issued cell phone by Freeze.

READ: How Houston Nutt knocked Hugh Freeze out of a job.

In a joint press conference with Chancellor Jeffrey Vitter, Bjork didn’t confirm or deny the report, only saying that Freeze’s conduct “was not something that we thought we could continue with him as our head coach.”

Added Vitter, “This is a sad day at Ole Miss.”

Vitter and Bjork said Freeze’s resignation had nothing to do with the NCAA’s investigation into the football program.

Bjork said the school released Freeze’s work-related phone records via a public records request for a six-day span in January 2016. Freeze redacted numbers from those records before they were released.

But Bjork said there was a brief call that wasn’t redacted that was brought to the school’s attention last week.

“Because the call lasted less than one minute, it did not appear at the time to be part of a pattern,” Bjork said. “We initially attributed this call to a misdialed number.”

Bjork noted a more extensive look into Freeze’s phone records found “a concerning pattern” of unacceptable behavior. Vitter and Bjork spoke with Freeze on Wednesday night when Freeze admitted the misconduct. Freeze then met with Bjork and Vitter again Thursday afternoon and offered his resignation, which they accepted.

Bjork said the school would’ve terminated Freeze with cause had he not offered his resignation. Ole Miss will not pay a buyout to Freeze, whose contract was extended to the maximum four years earlier this year.

Freeze has faced pressured from NCAA allegations against his program and from a lawsuit recently filed by former Ole Miss coach Houston Nutt. It was Nutt’s attorney who alerted Ole Miss to the call to the escort service, according to the report.

But an NCAA investigation into the program alleging 21 charges of academic, booster, and recruiting misconduct — 15 of those being Level I, or the most serious, charges — has overshadowed much of that success, especially over the past year. The school has already self-imposed several penalties, including 11 scholarship reductions over a four-year period and a postseason ban for the upcoming season.

Freeze, who was making more than $5 million per year, had a 39-25 record over five seasons, including a 19-21 mark in the Southeastern Conference.