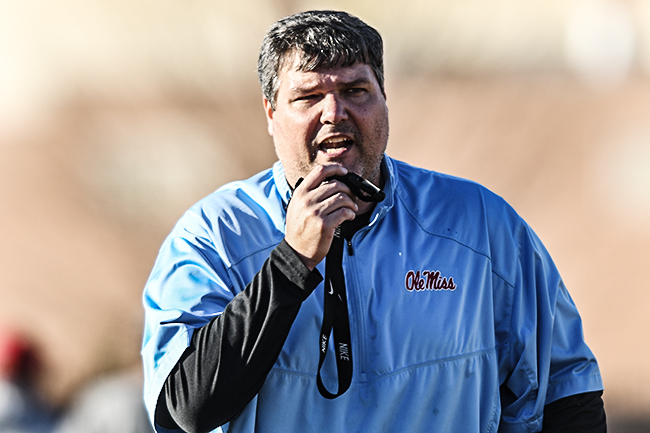 Ole Miss will have a familiar face leading it this fall before beginning a search for Hugh Freeze’s permanent replacement.

Offensive line coach Matt Luke will serve as the Rebels’ interim coach for the upcoming season following Freeze’s resignation. Luke was also the assistant head coach throughout’s Freeze’s five-year tenure, which came to an abrupt halt Thursday night following what athletic director Ross Bjork called a “concerning pattern” of Freeze’s use of a university-issued cell phone that was recently discovered.

Luke, a center for the Rebels from 1995-98 who’s also had stints as an assistant at Tennessee and Duke, addressed the team for the first time in his new role Thursday night.

“Matt is a great coach,” Bjork said. “He’s a leader, he’s a rock, he’s an Ole Miss Rebel, and I’m confident, especially even more confident after watching him address the team that he will lead this team and program through this difficult time,” said Bjork, who added that first-year defensive coordinator Wesley McGriff has been elevated to associate head coach. “We will support him in every way.”

Luke will only coach the Rebels this coming season. As for when Ole Miss will begin its search for a permanent coach, Bjork said that can wait.

“I told the football staff that the No. 1 thing, the beginning and the end, is the team,” Bjork said. “That’s all that matters. I haven’t even thought about a search. We have to get a plan in place. Right now, we start practice in less than two weeks. There will be a lot of time to conduct a search for a permanent head coach.”

Teams are allowed to have nine on-field assistants in addition to the head coach. Luke’s promotion leaves Ole Miss without an offensive line coach, but Bjork said another assistant will be hired from the outside or promoted from within the current staff.

“We will make sure we are fully staffed,” Bjork said.

Before Luke got his chance to speak, Freeze got one last chance to address his players after coming clean with Bjork and Vitter on Wednesday about his questionable cell phone use, which reportedly included calling a number linked to an escort service.

Bjork said the players handled the sudden news of losing their coach about as well as could be expected given the circumstances. They’re also dealing with penalties stemming from the NCAA’s investigation into the program, including a bowl ban for this season.

“I saw some heads go down as you might expect, but I thought they handled it very, very maturely,” Bjork said. “Several of them came up and hugged me, Matt Luke and the (assistant) coaches. From what I could tell initially, they’re ready to move forward. … Unfortunately we had a routine for this because we’ve gone through a tough time before. But I thought they were solid and ready to roll.”