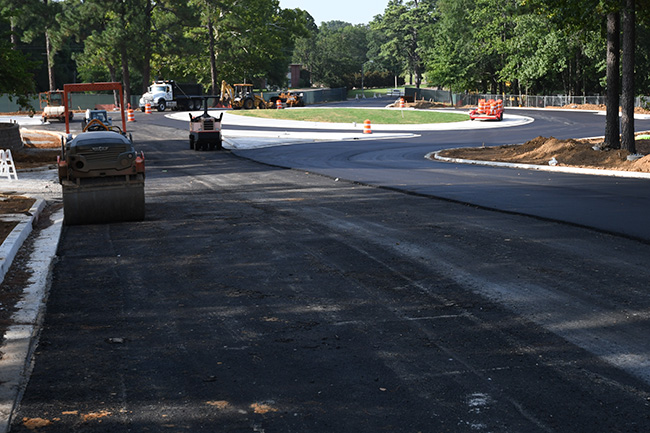 The construction work to build a new roundabout where Hill Drive and Hathorn Road meet is almost complete.

Work is expected to finish on Aug. 11 according to project lead, Dave LaBanc.

During construction, which began May 18, the Chucky Mullins entrance to the Ole Miss campus has been closed.

“We are very happy with our contractor, Xcavators, Inc., and their progress on this important project,” LaBanc said in an email. “We will open the roundabout after lunch on Friday, Aug. 11, as planned.”

Back in May, Ian Banner, the University of Mississippi director of facilities planner and university architect, said the roundabout, “will allow the traffic to flow more freely at this intersection.”

According to Mike Harris, the Director of Parking and Transportation at Ole Miss, is another project that Oxonians should be aware of if they’re driving on campus.

“All-American Drive is closed for construction,” Harris said. “At some point during the fall semester based on construction, we will be gating this street from Hill Drive to University Avenue and the gates will be closed Monday through Friday from 7:00 am to 5:00 pm to through traffic. They will open after 5:00 pm every afternoon and on weekends for normal traffic.”

New campus loop bus routes are being rolled out as well. They will run Monday through Friday from 7:00 a.m. to 7 p.m. There will be two routes on this loop.

“One will be called Rebel Blue and it will operate clockwise, while the other will be called Rebel Red and will operate counter clockwise,” Harris explained. “There will be two buses on each route. This will connect our outlying lots and all major areas on campus. All stops are set in locations that are within a 4 minute walk from anywhere on campus. I have attached a map that shows the routes.”

“Our goal is to help transport students and faculty and staff as well as visitors around campus in the most efficient and convenient way possible,” Harris said.

A few metered spaces are being added to the area around Martindale and the Turner Center as well as a new metered lot on the corner of North Dormitory Row and West Dormitory Row.

Harris reminds visitors that parking permits are required of all vehicles on campus between the hours of 7a.m. and 5 p.m. unless in the metered spaces which cost $1.25 per hour.

14-year effort at Ole Miss covers history of the…