Lafayette County School District dealing with too many students 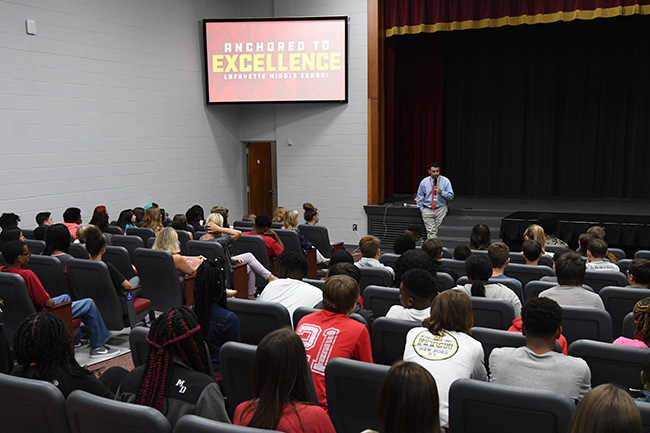 Lafayette Middle School principal Chad Chism speaks to an assembly of students this morning. The Lafayette County School District has an increase of 193 students this year in numbers that were announced at Monday’s school board meeting. (Photo/Bruce Newman)

The Board of Directors for the Lafayette County School District voted unanimously during a special meeting to increase the school’s budget by $2 million for the upcoming 2017-2018 year.

As reported previously, some of these increased funds will be used for new school buses, the middle school auditorium renovation and for the boardroom renovation, among other improvements.

During the meeting held Monday evening, Superintendent Adam Pugh discussed among the board members potential ways to deal with increased attendance.

Pugh made it clear that anything during the discussion would “not be concrete.”

“We didn’t anticipate 193 additional students,” Pugh said. “Maybe 30 to 40. When this year’s ninth graders become seniors, there will be just shy of 1,000 students in this high school building. We can’t house 1,000 students (here). And that’s if nobody else moves in.”

Pugh stressed that the bigger, immediate issue lies with the size of the middle school, adding that they needed to work on a solution “immediately.”

Rud Robinson, with PryorMorrow architects out Tupelo, also came to discuss potential options. Robinson toured the middle school campus with Pugh before the meeting on Monday.

Robinson talked about the possibility of building inside the courtyard of the structure.

“It’s not probable,” he said. “There’s no access to the courtyard to do construction. You’d have to work across the top of the building. You can’t just shut it down; there’s not enough time during summer break and build a whole new structure. Even if it were doable, we might only gain two or three classrooms.”

Robinson added that they could renovate the middle school gym into classroom space. However, he noted that the school would then lose its gym.

“If you were to lose a gym, where then would you build a new one?” Robinson asked. “And how much might that cost? I know you need an answer quickly, based on those numbers that Dr. Pugh shared with us.”

“I’m bringing this to you, not to alarm, but we have an issue,” Pugh said. “When they come, we’ve got to house them.”