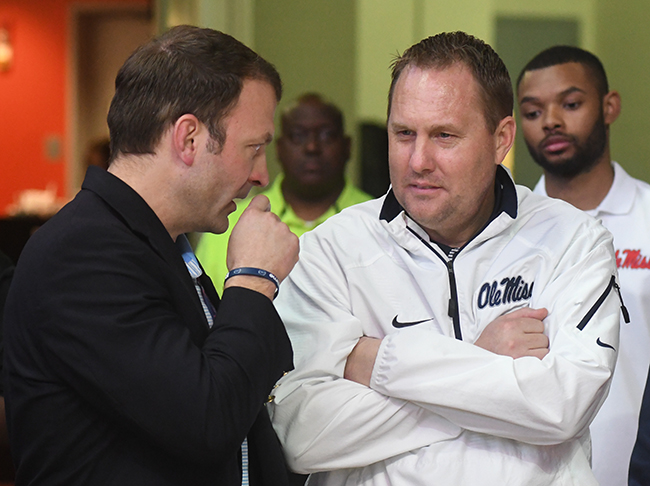 The summary, which the school received in late July, comes two months after Ole Miss filed its response in May to the amended Notice of Allegations it received in February. The amended NOA added eight alleged rules violations against the football program, bringing the total to 21.

Fifteen of those are Level I allegations deemed the most serious by the NCAA, including a lack of institutional control that replaced the more limited failure-to-monitor charge that appeared in the original NOA Ole Miss received in January 2016. Eleven of those Level I charges are tied to the five-year tenure of former coach Hugh Freeze, who resigned on July 20 amid an escort scandal.

In its summary, the NCAA stood by all 21 charges, including a failure to monitor the program levied against Freeze and those involving boosters.

Former staffer Barney Farrar and former defensive line coach Chris Kiffin are accused of arranging for then-recruits Leo Lewis and Kobe Jones, who now play at Mississippi State, as well as Lindsey Miller, the stepfather of former Ole Miss star Laremy Tunsil, to receive $2,800 worth of free merchandise from Rebel Rags, an Oxford-based retail clothing store. Farrar, who was fired as the associate athletic director for high school and junior college relations in December, is also charged with arranging for Lewis to receive as much as $15,600 in cash payments.

In its response, Ole Miss fought the charge against Freeze as well as the alleged free merchandise and cash payments, challenging the testimonies of Lewis, Jones and Miller and citing a lack of proof. Rebel Rags filed a lawsuit in June accusing the three of defamation, but the NCAA fought back in its response.

Ole Miss also attempted to shoot down Lewis’ credibility in its response by trying to point out inconsistencies in his various testimonies, but the enforcement staff said in part of its reply those attempts were “baseless and should be disregarded by the hearing panel.”

The enforcement staff also pointed out in its reply that Freeze continued to recruit Lewis even after acknowledging that he suspected Lewis was seeking impermissible benefits during his recruitment.

Ole Miss has already self-imposed multiple penalties, including 11 scholarship reductions over a four-year period and a postseason ban for the 2017 season. The Committee on Infractions will either accept the self-imposed penalties or tack on more sanctions when the school has its hearing with the COI on Sept. 11.

The COI will make its final ruling six to eight weeks after the hearing.

Four of the Level I charges date back to the tenure of Houston Nutt, who coached Ole Miss from 2008-11. Two of Nutt’s former assistants, David Saunders and Chris Vaughn, participated in academic misconduct by arranging for six recruits to receive fixed ACT scores at Wayne County High School and then lied about their involvement.

Saunders received an eight-year show-cause penalty from the NCAA while Vaughn was fired from his post as Texas’ defensive backs coach last year. Nutt and the school are in a legal tussle after the former coach filed a lawsuit in July alleging a breach of contract and defamation for what he believes was too much blame pinned on his tenure by the school in its initial response to the original NOA, though the case was dismissed in federal court Wednesday.

Read the full summary and the NCAA enforcement staff’s reply below.