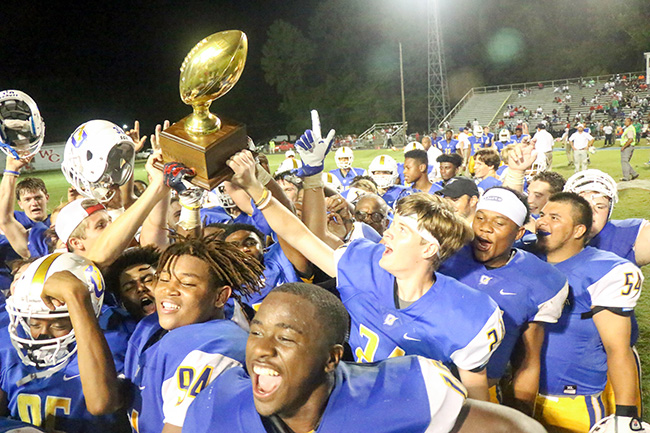 That’s the best way to describe the Oxford defense in the Chargers 21-6 win over Vicksburg in the Red Carpet Bowl at Warren Central’s Viking Stadium on Friday night.

“I really thought our defense was really really good tonight. Can’t say enough of how they dominated the game,” said Oxford coach Chris Cutcliffe. “Second half we challenged the guys on the offensive side of the to step up and they did.”

The one man that did step up was running back Hiram Wadlington.

“We knew were going to have to fight in the second half and coach challenged us to do that and we did,” Wadlington said. “I got to give credit to the offensive line. They did a great job of opening up lanes for me.”

But this night belonged to the Oxford defense. The Chargers only gave up 107 yards of total offense to the Gators (0-1). Biggest play came with 2:58 left in the third quarter. Oxford defensive back C.J. Terrell picked off a Joe Johnson pass in the end zone that killed a Vicksburg drive that started at the Oxford 25-yard line off a bad punt.

“Game plan as a defense is to come in and shut them out and we did that,” said Oxford linebacker Quentin Wilfawn, who had two sacks on the night. “One of coach Cutcliffe’s biggest things is take the fight to them and we came in here and did just that.”

Quarterback John Reece McClure tossed for 93 yards with two touchdowns and one interception.

“We came out and did what we had to do. Defense dominated,” McClure said. “Played well. In the second half we came out and scored to start the third quarter and gain momentum for the rest of the game.”

His touchdowns were 20 yards to Wadlington and a 16-yard touchdown pass to Jaquan Webb with 8:59 left in third quarter to extend the Oxford lead to 14-6.

“John did a good job of just making decisions and managing the game,” Cutcliffe said. “Good to see our receivers make plays and running game take control in the second half.”

Vicksburg’s only score came on a 35-yard interception return by Jamal Jefferson with 6:55 left in second quarter.

Turnovers plague Lafayette in loss to Cleveland Central in…